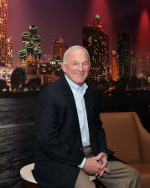 Former San Diego Mayor Jerry Sanders took over as president and CEO of the San Diego Regional Chamber of Commerce in April of 2013. And since then, has been helping San Diego have a stronger political voice and improved business relationships.

He said he accepted the position because he wanted to keep working on items that were an extension of what he was doing as mayor, such as helping local businesses, the military, job creation, tourism and continue strengthening San Diego relationship with Mexico.

“I just thought it was a good way to keep involved in those issues,” Sanders said.

He also put in place a mission statement for the Chamber, which reads: “The leading, most effective advocate and voice for business policy and connections in the San Diego-Baja California region.”

He said it was needed because the Chamber’s board of directors wanted a new goal and direction geared toward business and public policy.

For the mission statement to succeed, Sanders brought staff from the mayor’s office, including Aimee Faucett, who was chief of public policy and is now the executive vice president and chief operating officer; along with Paola Avila and Chanelle Hawken, who are helping lead the new public policy division.

So far the team has helped find and hire a Sacramento lobbyist for the first time since 2004, and helped steer campaign contributions to the current mayor’s race to endorse San Diego City Councilman Kevin Faulconer.

“There is a void in public policy right now and it’s the legislators who come out with public policy and we are left to react to it,” Sanders said. “And I think that we need to (have) a more proactive role for helping develop public policy that benefits businesses and jobs creation.”

Sanders has also appointed Avila as the Chamber’s new executive director of its Mexico Business Center, to strengthen the Chamber’s ties with our neighbors to the South.

“We see a growing trend for business using Mexico,” Sanders said. “We need to be able to work on both sides of the border to impact the economic environment.”

Moving forward, Sanders wants to help allocate money for phases two and three of the San Ysidro border crossing expansion project, currently in phase 1. The Chamber is also working with foreign car manufacturers in Mexico to develop a new rail line to and from the United States.

Sanders plans to travel to Mexico City in April to talk with political and business leaders as well.

Sanders and his staff also put together a strategic plan that they will be putting into action in 2014. It has five goals, which all revolve around the Chamber’s new mission statement.

Sanders also said he would like to see the Chamber’s membership grow because he says there is power in numbers when lobbyist or Sanders himself are trying to fulfill the Chamber’s agenda. The Chamber has nearly 3,000 members and Sanders wants to see it grow to 3,500 in 2014.