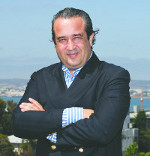 Just about two years ago, Armando Flores set out to start something more personal than just another construction company.

“I wanted to just be a little bit more of a boutique remodeling company,” Flores has said of his passion and the company he owns, Charco Design & Build Inc.

He set the foundations for it years earlier, becoming a key designer at Charco Construction Co. Inc. In 2012, he took his vision and made it a business, separate from Charco Construction but retaining the Charco namesake with the company’s blessing.

“We’re not like a Walmart, where you have a big showroom and all that,” Flores told The Daily Transcript. “We’re more of a one-on-one. I’m involved in every job with my clients.”

A 1989 graduate of Platt College with a degree in architectural design, Flores qualified for his general contractor's license early in 2012. When he started Charco Design & Build, he wanted to focus on his strengths of creating spaces, he said. A study of and focus on interior design is what he said separates him from other design firms.

Owning a boutique-type firm, he said no job is too insignificant to take, or to give attention to the same as any other.

“This type of work is not something that one day after another you decide to do just high-end jobs,” Flores said. “It takes a lot of patience.”

But some jobs are bigger than others for him. One had him razing an entire home in Point Loma. He replaced it with his own design, transforming the old into a new creation with such accents as a bamboo stairway and a barrel-vault ceiling.

Outside of his firm’s office, he’s also the creative director for the San Diego Collection — a museum of rare and exotic cars showcased for pleasure and for sale. His involvement in both ventures intersects at the point where design and a search for beauty meet.

“I think between the architecture, the art and the art of cars, everything has almost the same lines,” Flores said. Old Ferraris are his personal favorite.

Since starting his company, Flores recalls the relationships built, and the bonds created as he stands on jobs sometimes for months. It’s impossible, he said, to not develop bonds with clients, or the work he’s created. They’re like the bonds he feels for his own family, he said.

“It's just being proud of something you designed,” Flores said.