Award-winning architect made his mark on San Diego 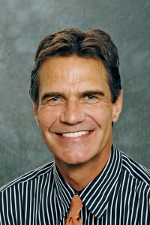 When he was a youngster in Flint, Mich., Gordon Carrier would frequently ride his bicycle past a little yellow house he remembers as looking different than any of the other houses in the entire area. Now a founding member and design principal of the San Diego-based architecture firm, Carrier Johnson + CULTURE, with award-winning projects throughout the world, Carrier credits the house with inspiring his initial interest in becoming an architect.

Carrier would later learn that the house that fascinated him was owned by a man named Tom Sedgwick, an architect.

Using his hands to build things came naturally to Carrier because his father was an excellent carpenter, as well as a professional millwright for General Motors. He was capable of fixing just about everything at the plant where he worked.

“He also taught me the concept of problem-solving. And I think his teaching about problem-solving was instrumental in my ability to figure out how to be an architectural problem-solver,” Carrier said. “I've always respected that greatly, because I learned how to think from him. He and my architectural mentor in school [Gunnar Birkerts at the University of Michigan, a disciple of the world-renowned architect, Eero Saarinen].

Carrier worked with a series of firms across the country, eventually settling in San Diego in 1988 to take over the reins of Carrier Johnson + CULTURE. Locally, Carrier's signature is on many projects, including DiamondView Tower, the Hard Rock Hotel and The Village at Torrey Pines East (student housing at UCSD).

“I see these buildings on a regular basis and it does bring just a bit of a smile on my face as I drive by, I have to admit,” Carrier said.

“I'm very excited about this new offering to downtown San Diego. It's a new skyline profile, it's a new corporate user that will stay in the downtown area, that is vital to our economy and all that. So, it has a lot of meaning to me,” Carrier said.

The new design reflects Carrier's philosophy of creating buildings that “appreciate their setting.”

“I'd like to say that the work that I've tried to do has been absolutely responsive to its place in the world. Every building we do is unique, because every site is unique,” said Carrier, an active member of the San Diego design and development community and many professional associations. “I don't think architecture should really be about styles. It should be about expression, based on client need and use and purpose.”