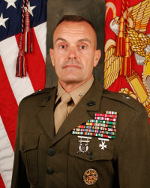 Brigadier Gen. Vincent A. Coglianese has served in the Marine Corps since being commissioned a second lieutenant after graduating from Indiana University in 1983. His posts have included assignments in Operation Desert Storm, the 2001 invasion of Afghanistan, and as an operations officer for the Joint Staff at the Pentagon.

The 1st MLG, made up of about 9,000 Marines and sailors, provide forward logistical support for the Marine Air-Ground Task Force.

Coglianese has a number of colonels and commanders who work for him, but, he said, “I am directly responsible for everything that happens or fails to happen.”

The father of three grown sons, one of whom served as a Marine and was wounded by a roadside bomb while route clearing in Afghanistan, wasn’t intent on a military career -- he wanted to be a special agent in the FBI. At the time, the only way in was with an accounting or law degree, but exceptions were made for former Marine officers.

Coglianese intended to stay in the military for three years, but discovered he enjoyed being a Marine, and his wife was supportive.

“I felt it was my niche, my calling. The more years I was in, the more I felt it was the right thing,” he said.

Over the course of his 30-year career, he has seen major advancements in technology and weaponry. The effect on training has presented unique challenges: even at 125,000 acres, Camp Pendleton isn’t big enough when your plane flies at 300 knots or your weapons system fires a distance of 90 miles.

“With the sophistication and modalities, there’s a greater need for air space to train in. We want to train like we’re preparing for war.”

The rise of information technology has resulted in an unending appetite to supply bigger bandwidth that supports command and control systems, video conferencing and the need for real-time information.

“It’s challenging in an expeditionary environment, because you don’t have time to set up those kinds of systems. We wrestle with that all the time, and sometimes we have to figure out what’s good enough,” he said.

As the Marine Corps reduces its force from 202,000 to 175,000, Coglianese said military leaders are concerned about meeting deployment demands and the reality that more Marines are leaving to enter a struggling economy.

“We want their transition to be successful,” he said. “We’re concerned about them getting out and contributing to society, getting good jobs, paying taxes and integrating back into their communities.”

It’s also going to be tougher for those who want to stay in because there might not be space for them.

“We want to be sure we keep the right Marines, that we have the right caliber,” he said.