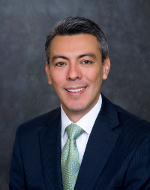 Since childhood, Ignacio De La Torre has had a healthy fascination with how things work. That fascination has served him well, whether he was disassembling household objects, pursuing a degree in electrical engineering at UCLA, or throughout the course of a 24-year career with AT&T, including his current role as regional vice president of external affairs for the communications giant, specializing in government relations.

“I was the kid who took things and broke them and tried to put them back together, but I was rarely ever able to put them back together,” recalled Del La Torre, a native of La Puente, about 25 miles east of downtown Los Angeles. “It didn't sit well with my parents at the time. They didn't realize that that really was carving what would be my career. Engineering was just something that fascinated me.”

After having worked for then-Pacific Bell during three summers while attending UCLA, De La Torre was hired by the company as a full-time engineer in 1989. He spent a number of years working in engineering, product testing, operations, marketing and sales before transitioning into his current position about 16 years ago.

“I certainly didn't plan on ever moving into government affairs. Quite frankly, when I started, I didn't know that we did that kind of work at the company,” said De La Torre, who has seen AT&T evolve from “telephone company” to “communications company” in a relatively short period of time, offering U-verse TV, as well as wireless telephone and Internet services.

“We've moved heavily into the wireless environment because consumers have moved us in that direction,” Del La Torre said. “They want applications and products that intrinsically make their lives easier and make it easier for them to do what they need to do at home and at work.”

But ever-increasing consumer demand places a heavier burden on AT&T's various networks -- wireless, wire-line and TV -- thus requiring their fortification and expansion, and someone who knows, understands and can explain exactly how they work.

“Our job is to help educate and ensure that folks understand the significance of the investment that we're making,” said De La Torre with regard to AT&T's plan to invest $14 billion nationally over the next three years to expand each of its networks to facilitate the roll out of its Velocity IP Plan.