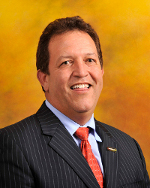 All the research, all the consensus-building, all the prognosticating comes down to this: the San Diego Association of Governments has at least three major local projects that are “ripe” for progress in 2014, according to SANDAG’s executive director Gary Gallegos.

All are elements of SANDAG’s 2050 Regional Transportation Plan, a strategy that envisions the evolution of the San Diego region’s transportation system over the next four decades.

Among the near-term priorities, Gallegos said, is the state Route 11/Otay Mesa East Port of Entry, a new freeway and port of entry intended to reduce border wait times and improve cross-border trade.

A groundbreaking ceremony was held Dec. 10 to herald the first phase of the $700 million to $750 million project. While a number of local, state and federal agencies on both sides of the U.S.-Mexico border are collaborating on the project, SANDAG will serve as the tolling authority, and also head the design and construction of the Otay Mesa East Port of Entry.

“The border crossings are one of the ways San Diego gets access to the global economy,” Gallegos said.

The new Otay Mesa East border port will be state-of-the-art, secure and efficient, Gallegos said, while handling a large volume of traffic in each direction.

The first segment of the project includes a stretch of the freeway and several freeway-to-freeway connectors, slated for completion in late 2015 or early 2016.

Gallegos said his near-term priorities also include advancements in the Mid-Coast Corridor Transit Project, a trolley extension project that could begin construction in 2015 with service to begin in 2018.

With the October completion of the final environment impact report for the North Coast Corridor, Gallegos said he is also looking forward to the first phase of Interstate 5 improvements to begin in 2015.

The first phase is slated to include an extension of the existing carpool lane in each direction from Manchester Avenue to state Route 78, additional express lanes from La Jolla Village Drive to the I-5/I-805 merge, replacement of the San Elijo Lagoon bridge, construction of direct access ramps at Manchester Avenue and Voigt Drive, and sound walls and trails for bikes and pedestrians.

Since joining SANDAG in 2001, Gallegos has helped the public agency evolve from one that thinks big to one that takes action.

“Back then, SANDAG was primarily a planning agency that passed off the plans for others to implement,” Gallegos said, explaining that federal legislation allowed the agency to take on more responsibility.

“We went from not just planning to building trolleys and freeways, and from research to engineers.”