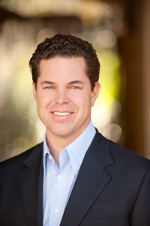 As an eighth-grader in his hometown of San Mateo, Jason Hughes was paired up with a local commercial real estate broker for “Take a Kid to Work Day.” The experience turned out to be a life-changer for the young man of modest means, starting him on a path to a highly successful career.

Today, he is president and CEO of Hughes Marino, the largest tenant representation company in San Diego.

“This guy picks me up in the biggest white Mercedes I had ever seen and he was so enthusiastic about office buildings,” Hughes recalled. “And up until that point, I drove by millions of these buildings and never thought once about who might be having their company in there and what (businesses) these companies might do, and what their office space might look like.”

The teenage Hughes was fascinated by the various buildings he toured with the broker. The man's enthusiasm was contagious and the fruits of his labor were impressive.

“At lunch, he pulled into his office parking lot and had me switch into his Porsche,” Hughes said. “At that point, I was like, 'You gotta be kidding me. I want to be this guy.’”

In terms of professional success, Hughes has more than become “that guy.” He began his 25-year career in commercial real estate with Cushman & Wakefield while still an undergraduate at Pepperdine University. He came to San Diego to earn his MBA at the University of San Diego and accepted a job with now-defunct Grubb & Ellis.

The high-rise Symphony Towers building was then his primary listing.

“So, I worked there for a couple of years, then I was convinced to get out of the dual-agency business model by a couple of guys who had kind of pioneered the tenant-rep model,” said Hughes, who agreed that representing both the landlord and the tenant created a conflict of interest.

“We've really leveled the playing field. We have used collective bargaining, because we represent so many tenants and, right now, we have over 5 million square feet of active client transactions (in San Diego alone),” said Hughes, who estimates that his company represents about 80 percent of tenants doing business in downtown San Diego.

The firm also has offices in Orange County, Los Angeles and Century City.

Through philanthropy over the years, Hughes and his company also have helped a number of charitable organizations. Among many notable examples, Hughes served as president of the San Diego Children's Museum after nearly single-handedly rescuing it from oblivion by raising $15 million and getting a $10 million construction loan.

Inspired by the documentary “Inocente,” about a homeless teenage girl in San Diego, Hughes Marino's 2013 holiday party was dedicated to providing gift boxes to 30 teens from the Toussaint Academy.

“We're always trying to do something to give back,” Hughes said, still grateful for what was given to him on that “Take a Kid to Work Day” so long ago.