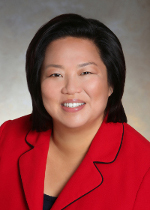 Having visited 104 countries throughout the world, Linda Lee, as president of the 11,000-member San Diego Association of Realtors, is the worldwide face, voice and ambassador for San Diego's residential real estate market.

“I did a lot of media starting out this year. I think our media exposure was quite a lot on TV and in print. We even made it to the Wall Street Journal online a few times this year, as well,” Lee said. “I'm always very positive, so I just want to continue to spread a positive message.”

That positive message includes promoting the local real estate market as an opportunity for investors outside the United States.

“I was born in Asia, so I go and I meet with the business owners there and I promote San Diego as a destination where they can send their kids, where they can invest, so to really put San Diego more on the map,” Lee said.

Originally from Taiwan, Lee came to the United States 30 years ago, graduated from Madison High School in Clairemont Mesa, earned an undergraduate degree in economics at UC San Diego and a master's in accounting at University of San Diego. A licensed CPA, Lee was working at Ernst & Young in San Diego when she was given an opportunity to get into the real estate business as an independent broker.

“I said, 'Well, you know, I always wanted to get into real estate, why not give it a try?' and I did,” said Lee, who was initially hoping to approximate the income she had been earning at her previous position. “The first six, nine months, I sold about $8 million (in real estate). Something like that. And I said, 'Oh, I can do this!’”

That was nearly 13 years ago. Today, Lee has numerous appointments to Realtor organizations at the state and national levels. Among her many professional achievements, Lee was recognized as the 2009 Realtor of the Year by SDAR. She has been with Keller Williams Realty since January 2012 and is a partner in the firm's San Diego Metro Market Center.

“I really love helping people. I mean, finding a home is really the biggest investment for everyone, and I really enjoy the process,” she said.

“Helping people is part of Lee's altruistic agenda, as well. Every time she closes a transaction, she donates $100 to the Big Brothers Big Sisters of San Diego. Lee has also spearheaded SDAR’s sponsorship of several programs to facilitate purchases by first-time home buyers.

“I believe in helping others to be achieving their dreams,” she said. “I'm a top producer, I love real estate, I serve my clients and I just have a phenomenal time. I'm really, really blessed to be doing things I really enjoy.”

-Lovitt is a Jolla-based freelance writer.