After more than two years of construction and several years' worth of effort, a new student union at San Diego State University will open this week for the start of the spring semester.

No longer Aztec Center — the facility was renamed after the wrecking ball took down the old building in June 2011 — the new Aztec Student Union will open Wednesday.

The official ribbon-cutting ceremony and dedication for the $104 million update to student life will be March 7, but SDSU's 30,000 students will be able to take in the activities, food options and study spaces beginning Wednesday.

The university is celebrating the new building this month with its First 9 Days campaign with many events planned for Jan. 22-31, including on the first day a welcome-home address and “nooner” concert in the Lee and Frank Goldberg Courtyard, as well as a basketball viewing party for fans to watch the Aztecs play the San Jose State Spartans on the road. 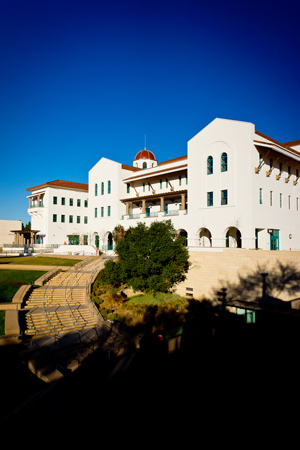 The new Aztec Student Union will greet San Diego State University students when they return for the spring semester Wednesay. The $104 million facility has 205,000 square feet of space and is LEED-platinum certified. Photo courtesy of Associated Students

Situated on roughly the same physical footprint as the old Aztec Center, Aztec Student Union’s LEED-platinum facility will have a much smaller environmental footprint. A platinum status is the U.S. Green Building Council’s highest designation for Leadership in Energy and Environmental Design. The nearly 1,400 square feet of rooftop space housing the LiveRoof Green Roof System will be the most visible of the center’s many green features.

“The new Aztec Student Union was envisioned from its earliest planning stages as an exemplar of the most rigorous standards in environmentally sensitive design and construction,” said Robert Schulz, the university's architect and associate vice president of operations, in a recent release.

On the LiveRoof, heat radiating from the roof to the interior will be dampened to reduce energy consumption and a garden will provide an aesthetic touch and act as a collection site for runoff stormwater.

All runoff and excess garden water collected on the rooftop garden will make its way into one of three 50,000-gallon tanks under the ground-level courtyard surface. The water will be reused for landscaping irrigation around the student union.

Sundt Construction was the lead contractor. The building’s 205,000 square feet across three floors make it about twice the size of its predecessor.