The 565,000-square-foot facility is being built on the 19-acre lot at Ruffin Road and Clairemont Mesa Boulevard where the county of San Diego Registrar of Voters building stood.

CO Architects designed the hospital. The general contractor is Hensel Phelps Construction, and KPFF Consulting Engineers is also working on the project.

Mary Ann Barnes, senior vice president and executive director for Kaiser Permanente San Diego, said the hospital is being built based on necessity.

“Kaiser Permanente is growing in San Diego,” Barnes said. “We are at 528,000 members and it’s been part of our growth and geographic expansion plan to have a hospital in central San Diego. When we look out into the future, and our membership, we needed another hospital facility in this area.”

The seven-story hospital will feature 450 patient rooms with "telehealth technology," which is the delivery of health-related services and information via telecommunications.

These include interactive screens where the patient can control everything in the room including temperature, lighting and video conferencing. Other new technologies include image-guided surgical and robotic equipment. 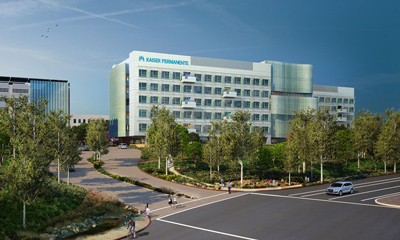 “Kaiser Permanente’s new central hospital will be a high-tech hospital of the future,” Barnes said. “From green design to the latest technology, it will have all the tools to provide our members with the highest quality care in a beautiful, healing and nurturing environment.”

The hospital is being built to meet LEED Gold standards from the U.S Green Building Council.

Sustainable features include a photovoltaic solar roof system, reclaimed water system for landscaping and cooling towers, an LED system throughout the hospital and chilled ceiling beams in patient rooms.

To accommodate for future technology so the facility can have the latest and greatest when it opens, Barnes said, the hospital is being constructed to have interchangeable platforms to easily bring in new equipment when it is available.

The hospital will be built with approximately 5,800 tons of steel, 38,000 cubic yards of concrete and 2.8 million pounds of reinforced steel.

Construction is scheduled to take 36 months, and the new campus hospital is set to open at the end of 2017's first quarter.

Kaiser Permanente says approximately 1,000 hospital jobs, along with 900 construction jobs, will be created.

Barnes said Kaiser Permanente chose this specific site because it is accessible from Interstate 805 and Highway 163, and is large enough to accommodate all amenities including private rooms.

Kaiser had a design competition three years ago to get the best-looking and most efficient hospital. It also took community input and acted on some suggestions, Barnes said.

The new Kaiser Permanente San Diego Central Hospital is part of the health care provider’s larger goal of expanding and improving all of its operations.