Revised plans for a large project next to Petco advance

After nearly a decade interrupted by a recession, an amended Ballpark Village plan for the 3.9-acre parcel between Petco Park and the San Diego Trolley line is making a comeback.

Since July, the property has been before a Downtown Community Planning Council meeting and the Civic San Diego Real Estate Committee.

Now Ballpark Village is up for consideration by Civic San Diego on Wednesday, Feb 26.

Plans for the triangle-shaped property, known as Parcel C, call for a mixed-use development with a single 37-story (approximately 410-foot tall) tower framed by a six-story -- or 85 to 90-foot tall -- building.

The amended project will include approximately 55,000 square feet of retail space and between 646 and 688 multifamily residential units.

Jim Chatfield, a JMI senior vice president, said whether the project will be condominiums or apartments depends on market conditions. A rental project would likely have smaller units than a for-sale project.

"We want the ability to react to the market," Chatfield said.

Chatfield said he's hoping it will be under construction by the end of the year, adding that the development should take about three years to build. 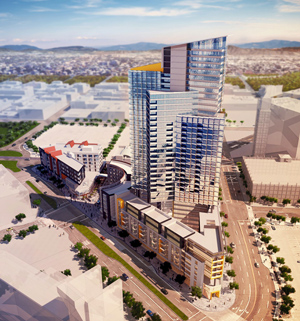 Plans for the triangle-shaped property, known as Parcel C, call for a mixed-use development with a 37-story tower framed by a six-story building. The amended project will include approximately 55,000 square feet of retail space and between 646 and 688 multifamily residential units. Courtesy image

Brad Richter, Civic San Diego assistant vice president of planning, who noted that all the major completed condominiums in downtown San Diego have sold out and the market now consists of resales, said a rental project might be easier to finance.

Even if the project were a rental, it wouldn't necessarily remain a for-rent property. Condominium conversions were commonplace before the recession hit in the late 2000s, and could return with an improving economy.

Chatfield said it should take about a year to construct the 942-stall subterranean parking garage in a two-level configuration.

As was the case with the Convention Center, this garage will need water removal before it can be developed.

Chatfield envisions the retail portion of the plan with restaurants and retail surrounding plazas.

"There will be five great retail spaces with three very nice restaurants," Chatfield added. "All the retail will be on the ground floor. There will be walking paths, and outdoor living rooms."

Although financing has yet to be arranged, the developers -- if they get under way by year's end -- will be entitled to a $24 million state grant toward the parking structure's cost.

JMI and Lennar have made a few requests of the Civic San Diego board.

While the project would have the large parking structure, JMI wants the elimination of a provision barring on-street parking along the east side of Park Boulevard in front of the property.

Under other proposals, the residential tower's maximum width would be increased from 100 to 130 feet, the required 10-foot building setback would be eliminated at a height of 60 feet along Park Boulevard and Imperial Avenue, and parking requirements for market rate residential units would be decreased from 1.5 to 1.25 spaces per dwelling unit.

The revisions also call for eliminating required building set-backs within the L Street and Eleventh Avenue pedestrian corridors, and a reduction in the 12th Avenue sidewalk from 15 to 12 feet wide.

The decision of the Civic San Diego Board is final, unless an appeal is filed. Civic San Diego's decision may be appealed to the Planning Commission within 10 business days of the vote.

While plans for Parcel C move ahead, planning for the adjacent 3.2-acre Parcel D at Harbor Drive and Park Boulevard and Imperial Avenue appear to be much more vague since Marriott backed away from plans to build a 1,950-room hotel in 2008.

Chatfield, who said the hotel project was a victim of the recession, said a somewhat scaled down version of the hotel might be feasible.

"We're holding out to see what happens with a Chargers stadium downtown," Chatfield said.

While most of JMI's development is elsewhere, it continues to have ownership interests in multiple East Village properties that are being held for future development.

The firm also completed a major renovation of its 107-room Inn at Rancho Santa Fe within the past few months.