In the works: New venues for a night out

By JENNIFER McENTEE, Special to The Daily Transcript
Wednesday, February 26, 2014 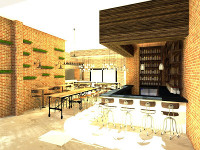 San Diegans looking for a new place to dine out, listen to music or dance the night away will have several stylish options within the coming months as construction projects near completion.

Moonshine Flats -- at 344 Seventh Ave. in the East Village, in the building formerly occupied by Block No. 16 Union & Spirits -- debuted Feb. 13 with a grand-opening event that benefited the Wounded Warrior Project. The 10,000-square-foot country rock night club offers line dancing, karaoke, a live band and DJs on multiple levels, as well as five bars, including one considered the longest on the West Coast at a span of 80 feet.

Moonshine Flats is a concept by Ty Hauter and his Good Time Design LLC, a local restaurant and entertainment venue design and consulting firm. It’s the fourth project by the group in just more than a year, according to company spokeswoman Fiona Leung.

“The redesign of Moonshine Flats was a collective effort by the Good Time Design team and everything was designed and made internally,” Leung said, noting the team included Hauter and Good Time Design's general contractor, Patrick Gallahue.

Juniper & Ivy, at 2228 Kettner Blvd. between Juniper and Ivy streets in Little Italy, is the newest restaurant project by reality-show chef Richard Blais. It’s slated to open in early March.

Restaurant spokeswoman Peyton Robertson said Juniper & Ivy is being billed as a “Left Coast cookery” with locally inspired flavors and ingredients. The menu is anticipated to include a snack category with an emphasis on seafood and vegetables, an a la carte category and a continually changing four-course tasting menu. 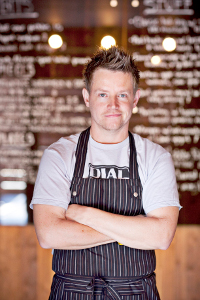 Executive chef Blais is a Culinary Institute of America alumnus who earned acclaim as the winner of Bravo’s “Top Chef All-Stars.” He’s currently hosting HLN’s “Cook Your Ass Off,” a show that puts a nutritious spin on unhealthy dishes.

Robertson said the restaurant is the result of a partnership between Rosen’s Juniper Hospitality, Blais, and Atlanta-based Concentrics Restaurants.

The restaurant is housed in an old warehouse, which is being renovated with modernist features by Atlanta-based architectural firm The Johnson Studio. Its design will include an open kitchen, exposed-beam ceilings, leather booth seating and outdoor patio space.

Back over in the Gaslamp Quarter, The Tin Roof has taken over the 11,235-square-foot retail space previously home to Rock Bottom Brewery at 401 G St., with a 10-year, $4.2 million lease from Carriage Works LLC. The venue is expected to open in April or May, according to owner Bob Franklin.

This will be the first foray into San Diego for the Nashville-based restaurant and music club chain. Franklin said he chose San Diego because he lived here for about six years and is fond of the region.

“It's always been my plan to open there when we were ready to head west,” Franklin said. “I think the Gaslamp is one of the best downtown areas in the country.”

He said the building is being completely remodeled, so will have a “completely new look and feel.”

Tin Roof will have live music and a casual atmosphere. Menu items at other restaurants in the chain include salad, cheese fries, nachos, hot wings, quesadillas, sandwiches and pizza.

“We're the type of place where you can come for a business lunch, a happy hour drink, or have a blast until last call with several hundred of your closest friends,” Franklin said.

Comun Kitchen & Tavern is set to open at 935 J St. in the East Village sometime in the late-spring. It’s the first solo project by chef Chad White, perhaps best known locally for his role as executive chef of North Park’s Sea Rocket Bistro, which closed last December after more than five years in business.

White is working on the project with Shane Brennan and Demien Ferrell of Enlightened Hospitality Group, in collaboration with Rodolfo Farber and Alfredo Jaime of San Diego-based commercial construction consulting firm Jaime Partners.

Farber said the restaurant, called “Comun” because the word can be loosely translated from Spanish as “community,” will be inventive with a Baja influence. The lunch and dinner menus will change with the seasons, and include items such as spicy fermented cucumbers, lamb legs, beef rib eye and grilled octopus tacos.

“The dinner menu will be a little more out there,” he said.

The project is in the framing and plumbing stage of construction, according to Farber. Comun will ultimately feature eclectic art and furniture.

“It will be geared toward local art, with different personalities,” Farber said. “It’s going to be a very great local joint.”