The value of a construction project manager is mistakenly overlooked by many owners — until major problems threaten to turn their dream project into a nightmare.

"That's when our telephone rings," said Gordon Kovtun, principal of KCM Group. "We ask what's going wrong, and the owner says, ‘I don't even know where to start.' "

San Diego-based KCM Group, which represents owners as their project manager for commercial and custom-estate construction, is frequently hired to take charge of distressed projects that are over budget, behind schedule or plagued by mismanagement. Its project-management team restores financial order and in some cases gets refunds for owners.

"A typical scenario might look like this," Kovtun said. "Construction is barely underway, and the budget is already blown. Change orders keep rolling in, and chronic delays create additional costs. The contractor and design team are at odds. It's obvious that no one has a strong incentive to control costs — except the owner."

The best place to start, Kovtun said, actually came earlier — at the outset of the project. Owners save time and money when they hire a project manager to represent them at project inception. By resolving conflicts within the design, an owner's project manager ensures coordination among design disciplines and corrects problems before they occur. The result is a streamlined schedule, with cost controls and fewer change orders. 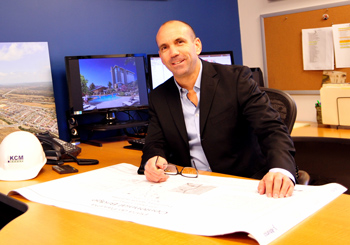 "It's all about anticipating and avoiding problems," Kovtun said. "Project managers also simplify the owner's life by serving as their point of contact with every contractor and designer. We're the only entity on a project whose sole interest is representing the owner. Our job is to make sure everyone else does their job."

KCM Group offers a diverse suite of services — with expertise in land development, commercial and custom-estate construction, environmental compliance and litigation support — that it mobilizes on behalf of each client.

"Our primary client base is project owners, and whether that's a major land developer, custom-estate owner or a commercial-development client, inevitably we save the owner money," Kovtun said.

In another case, a La Jolla custom estate owner was paying $700,000 a month for a project, although it was idled for months by design conflicts. Within a week, KCM Group resolved the conflicts and imposed cost controls and a rigorous construction timeline.

"As the owner's project manager, KCM Group puts its full spectrum of expertise to work for a single client," Kovtun said. "After we're done, they've all said, ‘I wish I'd had you there in the beginning.' "