The new medical office building is part of a comprehensive master plan that will transform the Scripps Memorial Hospital La Jolla campus, according to a release. Scripps said its construction, along with the adjacent Prebys Cardiovascular Institute, will "redefine health care in San Diego for the 21st century."

Plans for the six-story building include the provision of several specialty services, such as cardiology, gastroenterology, pulmonology, neurology, nephrology and endocrinology. Scripps said it will feature four cardiac catheterization labs, allowing for physicians to perform certain cardiac procedures in an outpatient setting.

The 175,000-square-foot facility was named after John R. Anderson V, who died of cancer in 2004 and is the son of Scripps Health supporters Eileen and John “Jack” R. Anderson IV. Eileen and John Anderson IV donated $25 million toward the facility's construction. The project is planned for a 2016 completion.

"We are extremely grateful for the long-standing philanthropic support of the Anderson family, and this latest gift will create a lasting legacy for generations to come,” Chris Van Gorder, Scripps Health president and CEO, said. 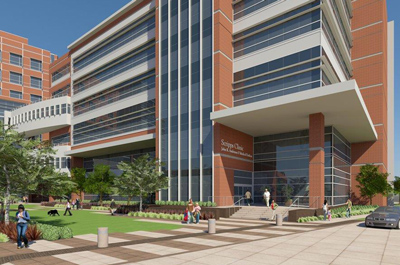