Inadequate existing facilities and necessary seismic retrofits are the main reasons why that in two years there will be a new centralized facility.

The downtown courthouse will be 22 stories with 71 courtrooms and an outdoor terrace, totaling 704,000 square feet. It will feature a secure vehicle sally port for the transportation of in-custody defendants, as well as improved access and efficiency for county residents. The new courthouse will also have a pedestrian bridge over C Street to connect with the Hall of Justice.

“This building is a symbol of access to justice,” San Diego County Presiding Judge David Danielsen said at the groundbreaking ceremony.

Mayor Kevin Faulconer said the project is also "a commitment of this city of getting together to revitalize and rejuvenate this area.”

The new building will consolidate multiple facilities in the downtown area into one facility, including the County Courthouse, Family Courthouse and Madge Bradley Courthouse, which are overcrowded, unsafe and inadequate for modern court operations, Danielsen said. 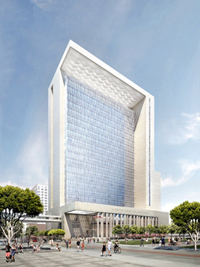 Construction is expected to be completed in October 2016. The project is being managed by Rudolph and Sletten Inc. and San Francisco-based Skidmore, Owings & Merrill LLP was selected as the project’s designer.

The new courthouse's design incorporates historical characteristics like a platform that will raise the entry off the street and also -- separating it from the commercial realm -- a large interior public space.

The new Central Courthouse is being built to meet LEED Silver standards from the U.S. Green Building Council, with features such as a three-story lobby atrium to utilize sunlight and optimize interior lighting.

Because the existing County Courthouse is on an active seismic fault, renovations were not an option, according to San Diego County Supervisor Greg Cox.

The new Central Courthouse will be located at a 1.4-acre lot on Union and C Street, where a parking lot sits now, across from the existing Central Courthouse. The building site was obtained at no cost to the state through an equity exchange agreement with San Diego County.

The new courthouse is funded by Senate Bill 1407, which was signed into law on Sept 26, 2008. This legislation designates judicial branch revenues to fund up to $5 billion in lease-revenue bonds that will finance new construction and renovation projects. It has been estimated that 104,000 direct and indirect jobs would be created by the various projects funded by SB 1407.

Approximately 1,100 construction jobs will be generated for both on- and off-site work.

Danielsen said the existing Central Courthouse will be demolished once the new facility is completed.

It has not been finalized what this land will turn into, but Danielsen said there have been talks of turning part of it into a public park with underground parking and also selling the lot that borders Broadway for commercial use, such as a hotel or office space.

“We would need to place an RFI [request for information] to decide what would be the best fit,” Danielsen added.

The county of San Diego will own the Family Courthouse and the Madge Bradley Courthouse properties through the equity exchange agreement. Cox said the county board of supervisors will determine at a later date whether to keep the properties or sell them.

Cox also said the county is looking into building an underground tunnel to connect the new courthouse and the county jail.