By GLENN GRANT, Special to The Daily Transcript
Wednesday, March 12, 2014

Even though it's been a warm winter along the North County coast, veteran broker Mike Evans isn't ready to call residential real estate sales there "hot" just yet.

"I think it's too early to tell if it's a hot market," said Evans, owner of Sea Coast Exclusive Properties in Encinitas. "It's definitely a brisk market. But I think 'hot' might be overstating it.

"I've been doing this a very long time, so I have a long-term lens, if you will," he said. "I guess another way you could say it is I'm not easily impressed. Let's wait and see. Two weeks doesn't make a career, or make a year."

Despite his caution, 2014 is looking like a second straight year of growth for Evans' firm, which has been in business in Encinitas since 1985.

His 140 agents completed more than 700 transactions in 2013, an increase of almost 33 percent over the previous year.

Their sales board is already filling up with rows of listings in escrow.

"I expect transactions to go up 10 percent in 2014," he said. "I'd be surprised if it doesn't happen. But I don't think that's the forecast for the industry. I do think my industry is going to have to work really hard this year.

"We have to provide great service because the public we deal with here along the coast is so sophisticated, which is a blessing in a way for us. But we have to work really, really hard to satisfy that level of sophistication," he said. 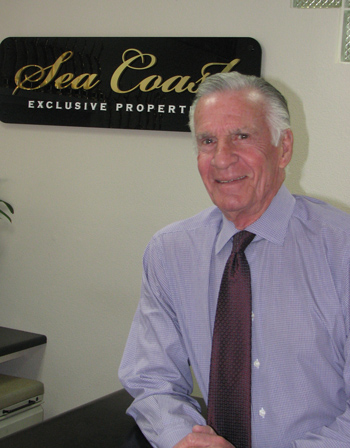 With fewer "hot buttons" on buyers' minds, homes that are priced right are selling within 30 days, even at the high end, according to Evans.

"We're in an interesting phase right now," he said. "As the market goes through its apexes and nadirs, there tends to be a lot more hot buttons. In a market like this, everyone's kind of just diving in saying, 'OK, I need three bedrooms, I need a view, I need a pool.'

"It's sort of a normal market so there aren't so many hot buttons," he said. "I think there will be as interest rates start to rise, which I fully anticipate this year. The cost of money will go up. Then that will be a hot button.

"Buyers have pretty much gotten over their 'I just missed the market' syndrome, where they were all crying the blues for about 18 months. But now they've moved on."