2014 off to good start for high-end home sales

By GLENN GRANT, Special to The Daily Transcript
Monday, March 24, 2014

"One of the most expensive homes in Poway sold for over $9 million at Maderas Golf Course," said Kropf, a listing agent at Berkshire Hathaway HomeServices in Rancho Bernardo. "That's pretty exciting because our high end is now at the $9 million mark instead of the previous $4 million mark."

Kropf, whose average home sale is in the $1 million range, said 2014 is already off to a good start for agents in the region, continuing a pace that began last year.

"In the last three to six months, the properties over $1 million have been selling quicker than they have in the past year, so that's a nice trend," she said. "In January in all of Poway, we had two that closed escrow over $1 million, and were nine in escrow over $1 million. One in north Poway was priced at $2.2 million to $2.4 million. It's a 6,681-square-foot contemporary rebuilt in 2009 after the fires.

"It showed just three times, then was purchased as a second home by a family in New York," Kropf said. "That was pretty amazing. It was only on the market 22 days." 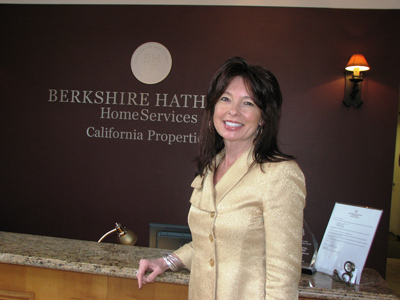 Suzanne Kropf of Berkshire Hathaway HomeServices in Rancho Bernardo says 2014 is already off to a good start for agents in the region, continuing a pace that began last year. Photo by Glenn Grant

No. 1 in sales in her office, Kropf also was among the top 10-producing Berkshire Hathaway agents in greater San Diego County for the first nine months of 2013.

She sold 57 homes worth over $46 million, which she feels speaks well for her region.

"To be in the top 10 for Rancho Bernardo is pretty exciting because our purchase prices are much less than in Rancho Santa Fe and La Jolla," she said. "The market's here's been very, very strong. What we're seeing now is a lot of buyers coming off the fence, writing offers on these properties."