By GLENN GRANT, Special to The Daily Transcript
Wednesday, March 26, 2014

The view from the top is awesome at San Elijo Hills in San Marcos.

On a recent breezy day, Realtor Mary Maloney pointed out everything from the Coronado Islands in Mexico to Mount Soledad in La Jolla to Dana Point in Orange County, with the blue Pacific lining the horizon.

Maloney, founder and owner of Hometown Realty, was standing in the backyard of a newly released house in The Estates at San Elijo Hills -- a gated, upscale neighborhood that just came back on the market after the original developer emerged from bankruptcy.

More than 400 "very interested" potential buyers toured the six model homes and 45 lots the second weekend in February, which bolsters Maloney's forecast that residential sales this year will be as awesome as the view in both San Elijo Hills and North County. 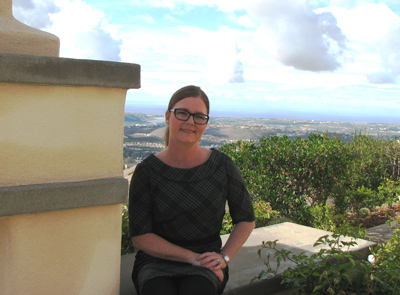 Mary Maloney of Hometown Realty shows off the view from The Estates at San Elijo Hills in San Marcos, where she predicts another solid year of residential sales. Photo by Glenn Grant

"I'm very optimistic about 2014," she said. "We had such a great price appreciation in 2013 that I think we're going to see a tremendous amount of activity. In true capitalist supply and demand, coming right out of the chute and the holiday fog, so far this year we are seeing tremendous buyer demand for our community.

"Being 'modern-day Mayberry,' as we call it, we have everything from high-performing, award-winning schools to 18 miles of natural trails at Double Peak Park," Maloney said. "The town center is growing and expanding and offering services to our residents, so it's a very highly attractive community for families.

"Being a bit more inland, you can get a little more for your money here and a better value," Maloney added. "There's a lot of new construction, but our oldest resale here is only 12 years old. So I think our activity levels and the number of transactions will be pretty significant in the North County area, especially in San Elijo Hills."

2013 also was a good year for Hometown Realty, the "small, boutique brokerage" Maloney acquired in 2008 after working for the original owners.

"We helped and serviced about 155 families in North County last year," she said. "We have six agents and two of us in the office truly live, eat and breathe San Elijo Hills. Our goal is to be the highest-grossing real estate office with the least amount of people."

If interest rates and the economy remain stable, she is well on her way to that goal.

She was able to add staff last year and is looking for two additional agents. Gross sales volume for 2013 was $82 million, Maloney said.