By GLENN GRANT, Special to The Daily Transcript
Tuesday, March 25, 2014

Even though his firm sold more than 100 homes valued at an average $1.1 million each last year, it's easy for Peter Lewi to recall the one that helped Masterpiece Realty Associates set an all-time annual sales record: an $18 million beachfront property in Del Mar that he personally handled.

It was one of the highest-priced homes ever sold in Del Mar and among the top sales in the county last year.

"We had an excellent 2013," said Lewi, a real estate broker and attorney who relocated from Santa Monica several years ago.

"I'm already optimistic about 2014, but I'm always optimistic and, I think, rightfully so," Lewi said. "My feeling generally about San Diego is that the supply-demand dynamics end up trumping everything else, because there are so many people who want to live here versus the supply of houses, that we seem to survive some of the down markets."

The new year started off a bit slowly for Lewi's 30 agents, but took off dramatically in late January. "There was a little post-holiday lull, but now it's picked up," he said. 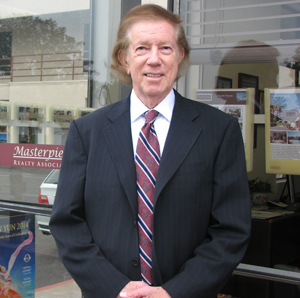 Peter Lewi of Masterpiece Realty Associates sold a home for $18 million last year, one of the highest residential sales ever in Del Mar. Photo by Glenn Grant

"We attribute that to people coming back from holiday and starting the new year fresh. I have one group of agents who acquired three new listings in the past couple of days; one's in the $4 million price range," Lewi said.

"We were suffering like everyone else from very low inventory, and now we're starting to get more listings. It continues to be a really good time to buy," he said.

Lewi, who tried many real estate cases, later became a transactional lawyer, developed properties in Santa Monica and served as an attorney for other for developers. He offers his legal services as a bonus for clients.

His advice to other real estate pros: "From a selling standpoint, realistic pricing is tremendously important. Ahead of that or a close second is properly staging the home for showings and making it available for showings.

"Using high-quality photos is very important, as is having a strong Internet presence. Those, and the condition of the home, are still the most important issues and probably always have been."