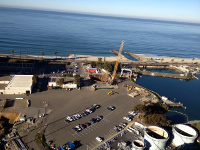 An aerial view of the project taken Feb. 14. When complete, it will be the largest seawater desalination plant in the Western Hemisphere.

As the state endures its third straight year of dry conditions, the county is awaiting the completion of Poseidon Resources' seawater desalination plant in Carlsbad.

Now more than a year into construction, the Carlsbad Desalination Project is slated to be the largest seawater desalination facility in the Western Hemisphere. The nearly 50 million gallons of water per day it's contracted to provide San Diego County residents by 2016 has received numerous mentions the last few weeks, including at a recent meeting called by the San Diego County Water Authority to discuss activation of its drought response plan with increased calls for voluntary water conservation.

"What we like to say is every drop counts," Dana Friehauf, acting water resources manager for the Water Authority said mid-February. "Seawater desalination is a drought-proof supply. So you're not at the mercy of Mother Nature, whether it's going to rain or it's going to snow."

Friehauf said that in a dry year such as the present, the Carlsbad plant would have been "very helpful," even though decreased water use by residents and investments in other drought-preparation projects has left the area with what the Water Authority says are adequate supplies for the year.

Principal among the benefits the desalination plant will provide, she said, will be to help the region reduce its reliance on the hard-hit State Water Project.

A closer vantage point shows how construction work is progressing.

"Other areas of the state that are being severely hit by the drought -- if we would have had the Carlsbad desalination plant online, it would have reduced our demand on imported water," and northern areas of the state could potentially use what the county was no longer needing, Friehauf said.

The 56,000 acre-feet of fresh water the plant is expected to produce each year are estimated to be enough for 112,000 typical single-family homes, or about 300,000 individuals.

Peter MacLaggan, Poseidon Resources' senior vice president of California for project development, said combined work on the desalination plant and its connecting pipeline was about 42 percent complete as of Feb. 12.

The plant itself was at about 48 percent, and the pipeline is about 35 percent done.

The pipeline portion of the project calls for a 10-mile steel pipe with a diameter of 4 ½ feet. It will connect the plant to the Water Authority's aqueduct in San Marcos. The Water Authority is also performing about $80 million in upgrades to its own facilities so it can deliver the desalinated seawater to its Twin Oaks Valley Water Treatment Plant for distribution.

In the overall desalination plant timeline, the joint-venture contractor Kiewit Shea Desalination is now 14 months into its 30-month construction schedule.

When the Water Authority's board of directors voted in Nov. 2012 to adopt the recommended water purchase agreement between it and Poseidon Resources, the agreement received 85 percent support from the directors.

Javier Saunders, a director representing the city of San Diego, said at the time that he couldn't predict when the next drought cycle would hit the region, but that he "certainly" knew the desalination plant would "play a big role in our long-term water and our long-term strategy plan."

"This is really about protecting our economy and our quality of life," he said.

Now in the middle of that next drought cycle, the region is more than a year closer to having the desalination plant online.

Early preparation at the plant's build site, on a corner of the Encina Power Station on the edge of Carlsbad’s Agua Hedionda Lagoon, began in 2009. It wasn't until the Water Authority accepted the water purchase agreement, though, that major work was allowed to begin.

Three crews are working to lay the piping down from its outward edges in. According to Poseidon, pipeline installation is nearing completion in San Marcos and Vista, while its construction in Carlsbad is underway.

Crews on the pipeline, MacLaggan said, are expected to meet in the middle sometime late this year or in early 2015.

MacLaggan called progress on construction at the plant site "impressive."

"We're on a six-acre site," he said. "A whole bunch of concrete structures are nearing completion. All the large tanks -- we've got one tank that holds 2.5 million gallons, others that hold a half-million gallons. The filter bays are an enormous structure."

The reverse-osmosis racks, which house the membranes that will physically separate the salt from the fresh water, are in place, while about half of the pressure vessels for the membranes are installed.

Equipment from various corners of the world is on order, including from the U.S., Brazil, Spain and Germany, but the labor, MacLaggan said, is largely local.

According to Poseidon, the project will support an estimated 2,500 jobs and infuse $350 million into the local economy.

The facility will cost about $691 million to build, though that figure does not include the more than $200 million in financing costs on the underlying debt.

By 2020, the operation's output is expected to provide up to 7 percent of the San Diego County Water Authority's total water supply.