By GLENN GRANT, Special to The Daily Transcript
Friday, March 28, 2014

Thanks to the improving real estate market, Derek Lundberg hasn't had to reach for the aspirin bottle as much as he used to.

Like others in the industry, the associate broker/owner of Century 21 Giesler-Bradford & Associates in Vista had his share of headaches.

"We'd been really trying to struggle to make things work the past six years," said Lundberg, whose career in real estate spans more than 30 years.

"Then 2013 came around and it wasn't great but it was a big, big improvement over what we'd seen before, so we actually were busy for a change. The tough news was we had a lot of situations where you just beat your head against the wall trying to get your offers accepted," he said. "You had lenders that were very difficult to work with. It was very tight credit, so you were lucky if you could get your buyers in a position to get prequalification letters.

"Then you'd get up against these situations in the lower price ranges where you'd have 20 offers you're trying to compete against," he said. "We would do everything we could to get these offers accepted. We'd write cover letters with pictures to try to make it as attractive as possible. And it didn't work all the time." 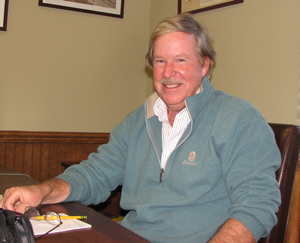 Derek Lundberg of Century 21 Giesler-Bradford & Associates in Vista sees 2014 shaping up as a stronger year than 2013. Photo by Glenn Grant

The good news, he said, is that the market isn't as bad as before. Housing inventory is down but not as low as last year. There's less competition against cash buyers and investors who come in with multiple types of offers.

"I'm looking forward to 2014 being stronger than last year," Lundberg said. "If homes are priced reasonably, they're selling in under 30 days now. I listed a home in Carlsbad, for instance, on a Thursday and by Friday morning I had two cash offers in hand.

"Credit was tight, but now it's getting looser," he added. "In fact, I talked to a lender the other day who had a product I hadn't heard of. He's operating an 80-10-10 [loan] with the bank or the lender investing in 10 percent. So when you go to resell that property, they're taking a piece of the action, which is a new approach."

Business has picked up to a level where the office has been able to expand. And for the first time in a while, more new agents are entering the profession.

"The phone's been ringing quite a bit with people who want to finish their license and start working," he said. "I tell them I think it's a good time to be coming into the business. You need to be a people person, you need to have a little in the bank. Before you even show up in my office, I want to you really look hard at where you think your sources are going to come from for purchasers. Try to get your business plan together up front."