By GLENN GRANT, Special to The Daily Transcript
Friday, April 11, 2014

Downtown Oceanside is a hoppin' place these days, and not just because of the new breweries and restaurants that have moved in over the past few months.

"This is a good time to buy here," said Kurt Kinsey, broker/owner of RE/MAX Seagaze Realty located in the heart of downtown. "There's a lot coming in within three blocks of the beach, a mix of condos, row houses, single-family homes. Our price points are so much more reasonable than any other area, anywhere from $400,000 to $460,000," he said.

"We're still very heavily military and young family," Kinsey said. "So everybody wants that four-bedroom for $350,000 to $380,000 and, quite frankly, they don't exist much anymore. Fortunately, with interest rates as low as they are, they're able to qualify in the low $400,000s, so that's what we're looking at as our average price point."

Sales have been hoppin' for Seagaze as well.

The office's nine agents closed 70 transactions in 2013, totaling $40 million. At the current pace, Kinsey expects to see about 100 transactions and $50 million to $60 million in sales this year. 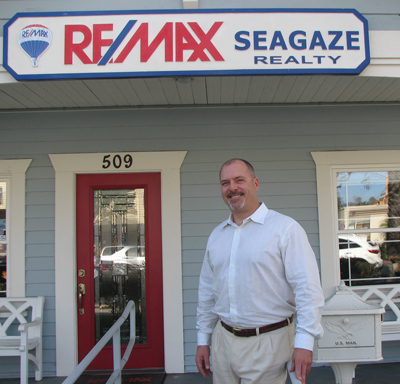 The firm specializes in residential properties in Oceanside, Vista and Carlsbad.

Some of the reasons Kinsey predicts a prosperous 2014: "It's not a bubble market again. Sellers right now don't want to be coming down so much.

"Up here we have homeowners who aren't investors," he said. "They're vested, they're going to be here for a while. They're not looking at it as a two-year investment and then sell it. They're going to live in it five to seven years, like it used to be. So we are seeing buyers step up to the plate and pay the difference."

"What's been good -- especially for Oceanside -- is we've been seeing a good majority of homeowners come out of the hole," he said.

"I think if you look at the count, we and Chula Vista were the two hardest-hit communities as far as negative depreciation. Seeing where we're at today, it's nice to see a lot of them are in a position to sell if they wanted to sell today," he said.

Kinsey also is encouraged because for the first time in a while, new licensees are contacting his office about working for him.

"I tell them and my agents, get out in front of people," he said. "Get back to basics like door knocking. Get involved in a business network, chambers of commerce. They're great places to get quality leads."