By GLENN GRANT, Special to The Daily Transcript
Tuesday, April 15, 2014

It's the classic American success story: Two guys come up with a new product idea, start a business in their garage, help change an industry and reap the rewards.

Except the two guys who founded REeBroker.com are from Lithuania, started in the living room of one of their homes in Carlsbad and recently moved their growing company from a Carlsbad office park to a newer, larger office building in downtown Oceanside.

When they opened their online brokerage in 2005, five independent agents from around California signed up for a flat fee of $500 per closed transaction (or 10 percent of the sales price, whichever is less), plus a $135 risk-management fee and no E&O deductible.

Agents keep 100 percent of their commission and only pay REeBroker.com after they receive it.

Licensed in California, the firm has grown in sales and agents each year since, with more than 2,000 agents using its broker services, and transactions totaling close to $800 million in 2013.

REeBroker.com has been confirmed as the fastest-growing online brokerage in the state annually since 2009 by real estate industry site journal.firsttuesday.us. 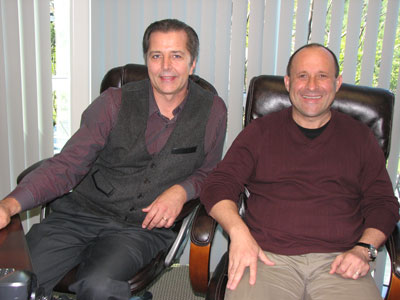 Brokers Gin Kazla, left, and Vygandas Anthony Razhas started REeBroker.com in 2005 and have grown it to more than 2,000 independent agents who use the online brokerage for a flat fee. Photo by Glenn Grant

Founding brokers Gin Kazla and Vygandas Anthony Razhas are from the same city in Lithuania, but didn't know each other until they moved to the United States. They met while working in real estate in San Diego.

"I was an agent for a couple of years and would always ask myself, 'Why do I need a broker?'" Kazla said. "It's a common question. I was looking to save some money and start a business. I tried to write the transactions myself, but to me it was not clear why I had to pay a broker so much money.

"When I met Vyg we had an idea: Why not make something more simple? Instead of having a physical office with a lot of expenses, why not have something online to be able to serve a lot of agents, charging a very small amount for commissions?

"Vyg has a background in computers and data architecture, so we started to build it. The prediction was very bad for us. Wholesale brokers started to call and say 'You just ruined the industry. You will not survive for $500 per commission,'" Kazla said. "But we just kept on doing it and when we reached 1,000 agents, we knew we had something. No one else was doing this business model. Now we have over 2,000 agents."

"I was always connected with real estate as an investor, property manager or agent," Razhas said. "I was working for DataQuick as a data architect when we met. I am comfortable with data and was very glad when Gin brought up the idea to start this business. I kept working for DataQuick while he was trying to organize REebroker.

"Now all our agents are happy because we give them tools to serve them better," Razhas said. "Every time they open a transaction, we have very tight tracking of everything they do. In general we have pretty much the same level of supervision as a regular broker, except we don't see them every day in our office."

Among the tools agents can put to use are REeBroker.com's escrow department, a transaction coordinator, 24/7 phone support, live chat, preferred lenders and other services. It can be an ideal situation for independent and part-time agents.

"They receive the same level of service and sometimes even better than they do in a traditional brokerage," Razhas said.

REeBroker.com is popular with agents because it is risk-free, he said. No money changes hands until a transaction closes, and there are no recurring fees.

"About 30 percent of our agents came in as referrals from our existing agents, which means they're happy with our service," Kazla said. "We also have agents who left us for various reasons but came back. In fact, 24 came back in January."