By GLENN GRANT, Special to The Daily Transcript
Tuesday, April 22, 2014

Jeff Hayes likes to think of himself as a traditional real estate branch manager. And that thinking has paid off.

"Last year was our best year to date," said Hayes, branch manager of Coldwell Banker Residential Brokerage in Encinitas. "It really turned a corner. We finished with a very healthy profit side. Most of my agents had their best year ever. "We're a real traditional office. We have office meetings on Tuesday, and then we go on tour to look at everything in our area that we listed the week before so our agents can get familiar with it.

"There are a lot of veteran agents in our office. Their average tenure is more than 12 years," Hayes said. "I don't have much turnover. My people are really experienced. They know what to do and they stay at it pretty hard."

Hayes' team of approximately 55 entities (such as mother-son, husband-wife) closed a record 500-plus transactions in 2013. Their goal is 525 this year, even with a low supply of available homes.

"It's really tough up here," he said. "The first part of this year has started off a little slower than normal due to the lack of inventory. And we're getting pretty aggressive on our prices, which is starting to diminish the buyer pool a little bit."

Hayes -- who has been branch manager since 2007, with Coldwell Banker since 1987 and in the industry since 1972 -- calls the region his office specializes in its "effective service area." It includes south Carlsbad, Encinitas and Olivenhain. 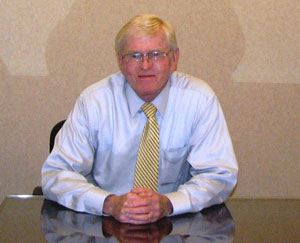 Jeff Hayes of Coldwell Banker Residential Brokerage in Encinitas expects to exceed 2013 sales this year despite the current low inventory of homes for sale. Photo by Glenn Grant

"We're very dominant in those areas," he said. "We've been No. 1 in market share there for years and years. The average sales price is $1.05 million. But if you pull Olivenhain out of that, it's $1.45 million. For detached units in Encinitas west of the [Interstate 5], its $843,000, and a little over $1 million in Cardiff. Anything under $800,000 in Encinitas is gone, and it's gone quick because we get lot of cash offers."

His advice for potential home buyers in 2014: "Last year when it just went nuts, especially in May, we were selling homes at $50,000 over list price. But the list price was based on the last comps. If I were a buyer now, I'd be looking closely at my price that I'm paying compared to the last time it sold for.

"I think it's going to be a normal old real estate market now," Hayes said. "We've got a lot of people around here who were under water but are no longer that way. If you took 20 percent appreciation on $700,000, you made $140,000 last year. So you're feeling pretty good."