Casual gets the job done for Bell & Associates Realty

By GLENN GRANT, Special to The Daily Transcript
Wednesday, July 9, 2014

As might be expected in an office two blocks from Moonlight State Beach in Encinitas, the style is casual at Bell & Associates Realty Group.

But broker/owner Mike Bell puts that style to work when it comes to buying and selling homes, and retaining satisfied repeat customers.

"We're not the big-box store," said Bell, a Navy retiree who earned his real estate license in 2003. "In fact, the running joke here is, if you ever come in with a suit and tie and nametag, you're fired. We pride ourselves on being very personable."

He worked for a large brokerage for a few years, decided he didn't like the corporate approach, and opened his doors in 2005.

"We don't have 100 listings and five agents working on each listing," he said. "Every buyer I have, it's just me and them. I don't take more than two or three listings at a time so I can concentrate on them 150 percent. 'How can I sell this house today? How can I put this thing together?' I'm constantly doing this in my head."

Bell personally closed 28 escrows in 2013, and his seven agents closed another 12, with total sales of about $15 million.

While they do business throughout San Diego County, he focuses on Solana Beach to Oceanside to San Marcos.

The office did well last year, but 2014 has been a bit tougher because of low housing inventory, Bell said. When choice properties become available, they receive multiple offers and often sell over the asking price.

"Real estate, especially in the North County coastal area, really never took the huge hit that a lot of the other places did during the downturn, like Otay Lakes or Riverside, Temecula or even out in the Escondido area," he said.

"So that's why it's much more desirable in this area and people are really looking. But unfortunately, a lot of them are priced out of the market compared to where they were a year ago. I hear that a lot: 'I could have bought that house for $600,000 last year. Now it's $700,000.'"

Bell, who also works with some investors on spec homes, only advertises on his website. He built the business based on referrals and maintaining relationships with past clients.

He turns them into unpaid salespeople -- although rewards them with referral fees when they lead him to a prospect that turns into a sale.

"Our business model is very client-oriented," he said. "Just to give you a crazy example: A few years ago one of my clients called six months after he bought a house from me. He said the air conditioning controller wasn't working. I just happened to have the same controller, so I drove over to his house and showed him how to program his air conditioner. Now I've got a great resource for life, and a great friend for life.

"We always give a referral fee to my clients," he said. "So if you tell someone about me and one day I just drive over out of the blue and give you a check for a couple hundred bucks to say thank you, then you're the guy who wants a stack of my business cards. You're my marketing.

"We've also built up a great referral base on handymen, contractors and landscapers -- people I've used personally for many years that I refer out," he said. "People will call me out of the blue way after they've bought the house and say, 'I'm looking at remodeling my bathroom. Do you know a tiler?' And I'll say, 'Call my buddy Carlos. He tiles.'" 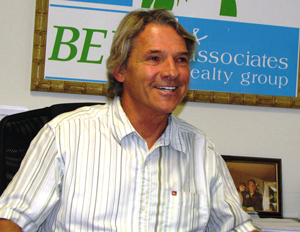