By SAMANTHA HENRY, The Daily Transcript
Friday, May 9, 2014

The North County coast is returning to a more traditional market, reflecting a change that’s occurring in much of San Diego County, said Garrett Lund, broker for The Lund Team Inc.

The Lund Team -- which was started by Lund’s parents and has attracted many family members to the business -- has had about a 50-50 mix of distressed and traditional sales for the past four to five years, but now foreclosures and short sales are only about 5 percent of the market.

“We’ve got a couple here and there, but for the most part we’re back to a traditional market, which is kind of fun,” Lund said. “We’re dealing with that change and always trying to keep up with what the market is doing, and it changes fast.”

Lund and the Lund Team cover the North County coast, focusing on Carlsbad, Encinitas, Oceanside, Vista and San Marcos. Lund started his real estate career in high school by helping his parents, and at 18 he was one of the youngest real estate licensees in the state.

He studied finance at Arizona State University while continuing to work with the family business during summers. He started working full time with the business after he graduated and earned his broker’s license.

The Lund Team is unusual in that there’s no competition among its members; each member participates and gets paid on every transaction.

“If we get a listing, we all get paid on it so we all work on it -- so we’re all incentivized,” Lund said. 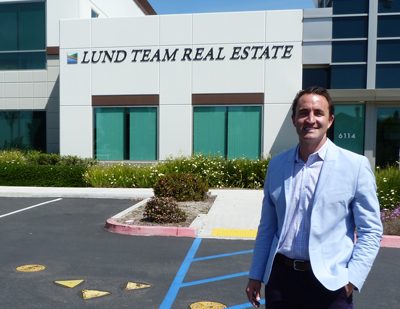 Garret Lund is the broker for The Lund Team Inc. Staff photo by Samantha Henry

Each member of the team has something to contribute in addition to real estate expertise. Lund uses his photography skills to enhance marketing materials. And his brother, Tyson, studied computer information systems in college.

Lund estimated that the Lund Team was about $80,000 shy of $100 million in sales volume last year -- a busy year with about 160 transactions. By last May, the team had about 29 properties in escrow, and today they have about one-quarter of that amount.

“We’ve seen prices and interest rates running up together over this last year, so we’re starting to see a little bit of a slowdown just in terms of volume, turnover,” Lund said. “Prices are still remaining strong.”

When there’s a shortage of supply and over demand, Lund said, the market has the momentum to “continue on up.”

Lund is seeing fewer speculative buyers and more people holding onto properties. He cautioned that real estate is difficult to forecast, but said it’s still a safe investment for people to lock into and hold for the long term.

“People were just buying to instantly make money,” Lund said. “Now people are buying to set up ‘Here’s where we’re comfortable.’ And I think that’s the right way. I think we’re in a good, stable market.”

Lund said prices have plateaued in some geographical areas and he expects only a marginal gain in prices -- unlike the 20-plus percent increase last year.

There are fewer investors than in the past few years due to price increases, but investors and owners who held onto their properties as rentals during the recession are coming onto the market as sellers, Lund said.

“When I go on the MLS I can see on the occupancy a lot of tenant-occupied properties, so that also indicates the market is getting better because they’re now able to move these properties where they probably weren’t able to a couple years ago,” Lund said. “We are starting to see that especially in some of the big areas like Carlsbad and Encinitas, where they can unlock that equity or move it to the next property.”

Those investors and owners are helping the market, but there’s still a tight inventory.

“Although I’m starting to see more come on the market and we are starting to see some ‘down arrows’ on the MLS, which indicates there is some pricing correction, but it’s not substantial. They’re still coming on too high, anyway,” Lund said.

Properties aren’t getting as many offers as last year when mortgage rates were about 3.5 percent and prices were still “relatively reasonable,” he said.

But the Lund Team is busy on most price points and has felt a slower market only on properties priced at more than $1.5 million.

Lund said he doesn’t think San Diego will ever have affordable real estate, but that prices are still very good in some areas.

South Carlsbad has experienced a great rebound in prices, with some homes selling the near peak values of 2005, while some pockets around Oceanside are still “dynamite deals,” Lund said.

Homes priced in the $800,000 to $1.2 million range are moving close to the peak prices, while homes that were priced at $3 million at the peak are selling for $2 million.

However, homes that are reaching their peak price points might not just be increasing with the market.

“We just sold one in Aviara [in Carlsbad] that was just a spectacular home -- and I think the peak was around $1.4 million, and we got around $1.3 million. The value may be near the peak but it had been very much enhanced over the years, so arguably the value is better and the rates are better,” Lund said.

There are pockets where new construction is starting to come in, but it’s a fraction of the amount that there was at the peak, he said.

There are some areas where increased density makes sense, Lund said. The Barrio area in Carlsbad between the freeway and the train tracks would be “great for a little higher density,” he said, adding that three or four stories would work there and not obstruct anyone’s view.

The easy maintenance of these properties attracts young professionals, small families and active retired, he said. Encinitas has done a good job providing this product -- including the Whole Foods property -- which Lund said a lot of people are attracted to.

In addition to the housing shortage, buyers are also still facing some lending challenges.

Lund has seen more financing options coming into the improved market, with buyers moving away from the 30-year mortgage and choosing adjustable rate mortgages, which he said could make sense for those buyers who plan to move up or hold the property for a couple years.

Loans are more creative, but also require documentation, unlike loans from 2005.

“They still do put you through the test to make sure it’s a good, solid deal,” Lund said.

Stricter guidelines are causing challenges for some of his buyers. He has two buyers who want to use the Federal Housing Administration program. One is looking for a property about $350,000, and the other can spend about $475,000 -- both price points will most likely mean an attached property in the areas they’re looking, he said.

“The problem I’m finding is that most attached properties are not approved for an FHA loan,” Lund said. “The actual physical complex has to be approved. A lot of agents don’t realize that -- they’ll advertise it as FHA thinking, ‘I’ve got good owner occupancy, the property is in good shape, it should go FHA.’ But what they need to do is check the FHA site, where it’s updated all the time, and see which complexes are approved to what date. And if you run a certain ZIP code, you’ll find that 70 percent of them have expired out.”

Lund suspects that the approval has simply lapsed, as FHA gives a specific time frame for the approval.

His buyers are ready to go, but they are forced to play the waiting game until units in FHA-approved complexes become available.