Eisendrath family is the home team for coastal real estate

By GLENN GRANT, Special to The Daily Transcript
Monday, July 14, 2014

After 35 years in real estate in North San Diego County, Richard Eisendrath hasn't lost his enthusiasm for the region he calls home. Nor have clients of Eisendrath Team, his family-run business with offices in Vista and Oceanside.

"2013 was a great year and 2014 has been fantastic so far," Eisendrath said. "It seems there's a positive attitude that things are getting better and people are getting excited about coastal cities. There's a lot of activity in Oceanside and a lot of the folks are coming from other areas, recognizing what a great investment that community is.

"Many of them are foreign investors and a lot of them are cash buyers coming over and buying several properties at a time," he said. "We have a listing in Oceanside for $1,050,000 with an all-cash offer. We're just trying to work out the finer points. It's a better buying climate. The current interest rates definitely help, when you think they were up to 18 percent in the [1980s], and now they're at 4.25 percent."

The Eisendrath Team deals in land, commercial and apartment properties in addition to single-family homes.

Family members include wife Diane, daughter Becky and son Mike. They are all part of a larger team, affiliating with The Real Estate Consultants in Oceanside the past 18 years.

Richard Eisendrath credits his son -- who joined the firm recently after earning his agent's license -- with incorporating social media into the marketing mix.

"We post items about things you can do with your home. We put up new listings, open houses, what's going on in the marketplace," he said. "We've created a place the community can go to when they're looking for information about real estate. But you want to make sure it's valuable information. You don't want to just spam your wall with everything you see because people don't perceive you as a credible, reliable source to go to."

His dad is confident the strategy is paying off, and predicts another year of solid sales for the team.

"I think 2014 is going to be a very good year," Richard Eisendrath said. "We're getting first-time buyers and sellers who want to downsize. People are getting equity in their homes and starting to think this might be a good time to move on to something else. So I think the inventory is picking up.

"The market is taking off again, not just in residential, but in two- to four-unit apartment buildings, even five or more," he added. "And the demand for land is increasing. The amount of activity we've had in the past 60 days has been fantastic. And our buyers are excited.

"Mike's going to be closing his first transaction in just a few days and the couple is absolutely excited about the home they're buying," he said. "It's really good, positive energy out there." 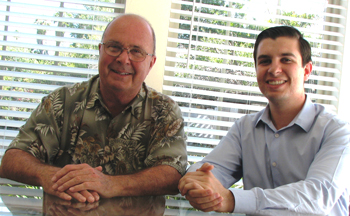