By THOR KAMBAN BIBERMAN, The Daily Transcript
Thursday, May 8, 2014

The building known as The Atlas in Carlsbad was vacated when the Upper Deck trading cards business moved to Rutherford Road in 2011. It was acquired by CR Sea Otter LLC, an entity controlled by Los Angeles-based Regent Properties.

“Regent Properties plans to reposition the property to serve growing tenant demand in the market, which has a scarce supply of large blocks of contiguous space,” Starck said in a statement. “This facility is the former headquarters location of the Upper Deck trading card company and considered a single-tenant corporate headquarters building. Regent has begun redeveloping the building to allow for a single tenant or multiple office and R&D tenants.” 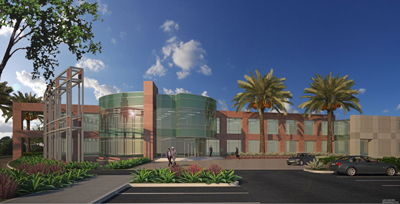 With the acquisition, Regent Properties has acquired more than 650,000 square feet in Carlsbad within the past 2 years.

Regent acquired a 75,093-square-foot office building for $12.1 million at 3207 Grey Hawk Court in Carlsbad in January.

Another sizable acquisition by Regent in Carlsbad was that of the 103,547-square-foot Palomar Terrace office building at 3115 Melrose Drive, which was acquired for $8,725,000 in June 2012.

As invested as Regent is in Carlsbad, it is even more so in southwest Riverside County.

According to CoStar, Regent owns hundreds of acres along West Florida Avenue in Hemet where a "super regional mall" is being considered for development. It also owns more than 40 acres in Hemet that also may be suitable for a project.

Since its founding in 1989, the Los Angeles-based company has purchased, developed, financed or managed more than $2 billion in office, industrial and retail transactions.

Starck meanwhile said it is no big surprise that Regent is interested in office and industrial buildings in Carlsbad.

“Carlsbad currently has no new spec construction," Starck said. "This project will be well positioned to capitalize on an environment where we are seeing significant net absorption and decreasing vacancy year after year.”

The CoStar Group pegged Carlsbad with an 11.6 percent industrial vacancy rate as of the end of March.

The submarket posted 79,924 square feet of net industrial absorption during the quarter, though it still has nearly 1.6 million of available space.

That includes the vacant 246,668-square-foot Atlas at Carlsbad property that Regent just bought.

The overall office vacancy was 16.7 percent with 1.11 million square feet available out of a 6.67 million-square-foot market.