By GLENN GRANT, Special to The Daily Transcript
Wednesday, July 30, 2014

After 11 years in real estate in the Escondido area, Jeff Erwin has a good idea of what homebuyers want.

"What I'm finding right now is that they really want to have a fixed-up home," said Erwin, broker at Erwin Realty in Escondido. "They don't want to come in and put their elbow grease into fixer-uppers. That's certainly the case in the area we're working here in Escondido, San Marcos, Poway and 4S Ranch.

"I have a client who's been looking at some nice bigger homes. He has a growing family and has been in the same home for 15 years and he says, 'I don't want to go do that again. I don't want to paint the pool and redo the kitchen to sell the house.' A lot of buyers like him in the $700,000 to $800,000 range want to buy a home that's ready to go."

Erwin has been able to help.

His three-person office closed 12 transactions in 2013, totaling about $5 million, with an average price in the $600,000 range. He's on about the same pace or better this year.

"It makes for a decent living for a small office," he said. "I've kind of gone back and forth with the economy. We had a bigger office in Escondido years ago. We're ramping it up a little bit now. I don't want to be a big shot. I just want to have a few people I can rely on and know they're going to produce something."

Erwin is facing the same challenges as many others in the business. Reduced inventory and new loan-qualification regulations are among them. In his region, selling high-end homes can be another issue.

"The tough part is finding a lot of buyers, and listings are certainly king right now," he said.

"Looking at the market in Escondido, in January there were over 200 sales just in the 92029 ZIP code and over 500 sales in the 92025 ZIP code. A month later, there were less than 100. So it's a bit frightening to think that there's less than a month's worth of inventory out there," Erwin said.

"People are starting to get accustomed to the body-cavity search of acquiring a new loan. They're understanding that they've got to be able to document fully. And there's a bit of a stigma on the over-$1 million homes in Escondido.

"I sold one last year for $1.5 million but it took me the better part of the year to get it done. It was the highest-priced sale in its ZIP code last year."

Erwin relies on an arsenal of marketing techniques to move properties, including direct mail; informational business cards for sellers, including URLs for a dedicated webpage for each home listed; letters to neighbors describing the house and its benefits; and well-staged open houses.

"Open houses are an opportunity to meet to a lot of people," he said. "I'd hate to be sitting behind my desk all day and not be able to talk to people, because that's where the business comes from." 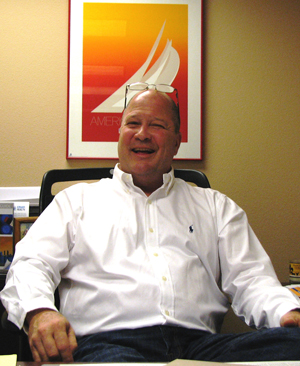