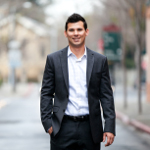 Sean Conlon and his business partner, Will Ford, were on the hunt for their next entrepreneurial venture when Ford got a timely gift from his wife: a Birchbox package of personal grooming products.

If people would subscribe to receive monthly home delivery of specialty items for themselves, would they do the same for their pets?

“We saw a good parallel for pets,” said Conlon, explaining that both he and Ford are dog lovers. “There’s a big ‘humanization’ of pets, if you will. Over two-thirds of dog owners consider their dog a family member.”

After some research, the pair launched a pilot website called PetBox in April 2013, and within a month had more than 300 members. The first round of shipments went out from Conlon’s San Diego garage.

“At that point, we thought we definitely have something here,” said Conlon, 27, PetBox’s CEO.

They raised just under a million dollars in venture capital funding, he said. The startup is working to differentiate itself from pet supply subscription competitors, like New York-based BarkBox, by offering a monthly box of dog and cat goodies based on attributes like the animal’s size, allergies and chewing habits. Pet owners can also opt to be surprised with a selection of toys and treats chosen by PetBox.

The customization requires a somewhat complicated back-end process and a larger inventory than if the PetBoxes were predetermined, Conlon said. The customer, meanwhile, uses a relatively simple point system to order product favorites and sample new ones, he said.

Subscriptions are offered in three-, six- and 12-month packages, starting at $29 a month.

“The products that we’re sourcing are with premium brands that you won’t necessarily see in a PetSmart,” Conlon said. “They’re hard to find even on the Internet. It’s like going to a boutique pet store, but with free shipping.

“I would say PetBox is a great way to discover brands and save money,” he said.

PetBox has 10 employees and an office suite on Carmel Mountain Road, but ships from a fulfillment center in Missouri. In less than a year, PetBox has fulfilled more than 60,000 shipments.

An accounting and finance graduate of the Kelley School of Business at Indiana University, Conlon has been an entrepreneur since the age of 18, when he started Yearbook Payment Services to address inefficiencies he saw in the school yearbook production process.

Whether serving the education market or the pet industry, Conlon said he prefers to see his ambitions as service-based. “I’m not really a product guy,” he said. “I’m focused on giving back.”

Perhaps the biggest fan of Conlon’s latest entrepreneurial pursuit is his 108-pound, 8-year-old golden retriever, Beau. Conlon said it was a rewarding experience for both pet and owner when their first PetBox order was delivered.

“When that box arrived, my dog knew exactly what it was," Conlon said.