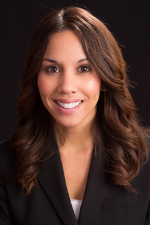 Civil litigation and trial attorney Melissa Deleon is active in the community, but the organization closest to her heart is the Filipino American Lawyers of San Diego.

In January, she was sworn in for a second term as president of the Filipino American Lawyers of San Diego. Under Deleon’s leadership, the organization is again working with a local nonprofit that builds libraries and promotes literacy in some of the poorest areas in the Philippines. Last year when she asked members to bring donations of children’s books to all FALSD’s events, they were able to send hundreds of books to the Philippines. She also worked with local Filipino-based groups to ship donations of clothing and blankets to areas most devastated by Typhoon Haiyan.

Deleon herself received a scholarship from FALSD in her third year of law school.

“It was a big thing for me back then, and very helpful. I’m grateful to the organization,” she said. “Some of my greatest mentors and friends came from that experience, and I just really wanted to pay it forward.”

Deleon now mentors law school students, not just with FALSD, but also with the Pan Asian Lawyers of San Diego, where she serves as a board member. Deleon said she enjoys working with students, and will often invite them to spend a day at her office or shadow her in court.

She also volunteers with the San Diego Asian Youth Organization, helping to educate at-risk high school students on the paths to success. In March, Deleon helped organize a “Law Day,” where these high school students met with lawyers to learn about paths to college and how to pursue a career in law.

In addition, Deleon works with the Filipino American Association for Developmental Disabilities, and has spent much of her career advocating for individuals with developmental disabilities who have been victims of caretaker abuse or neglect.

She is active in the San Diego Branch of the Filipino American Chamber of Commerce, and volunteers her time to advise SDSU students who want to attend law school.

Although community service consumes much of her free time, Deleon said it is well worth it.

“It has been very important to me to use my leadership role as an opportunity to give back and gain some exposure for these very worthy organizations I have worked with and causes I have worked on,” Deleon said. “I truly believe that lawyers have much more fulfilling careers when they are engaged in the community and committed to public service.”

“I’m also lucky that I work for a great firm, with attorneys who are very understanding when it comes to how important it is to give back,” she added.