By Tony Lovitt, Special to The Daily Transcript
Thursday, March 27, 2014 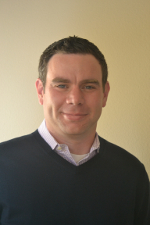 The Billiken, the unique, Buddha-like mascot of St. Louis University, is described as a good-luck figure that represents "things as they ought to be."

Since 2011, Murphy has been assistant general counsel at Dexcom (Nasdaq: DXCM), a medical device company that produces and manufactures continuous glucose monitors for people with diabetes.

Prior to coming to San Diego, Murphy worked in the Newport Beach offices of Stradling Yocca Carlson & Rauth, a law firm with a strong presence in life sciences and medical devices.

Murphy came to San Diego in 2006 to help Stradling open an office. Five years later, he was recruited to Dexcom by Steve Puselli, the company's executive vice president of strategy and corporate development, and a former partner at Stradling.

“The main, core product is our continuous glucose monitor, which is marketed under the name the Dexcom G4 Platinum,” said Murphy, who estimated Dexcom's market cap at approximately $3.5 billion.

Continuous glucose monitoring systems use a tiny sensor inserted under the skin to check glucose levels in tissue fluid. Diabetics can manage the disease by using the results to make decisions about food, physical activity and medications.

“One of the initiatives that Dexcom is undertaking is to make the data generated by our devices more accessible to third-party applications (such as iPhone and Android apps) and software developers,” Murphy said.

By doing so, Dexcom patients will have more options for visualizing and analyzing their continuous glucose monitoring data -- along with any other data that may be included in the applicable third-party application or software -- which may allow them to gain a better understanding of how diabetes affects their daily lives.

“Dexcom Inc. is a company that has seen year-over-year growth of between 45 to 65 percent, and my position has allowed me to take a lead role in creating processes, procedures and forms of agreement to accommodate this rapid growth and respond to further accelerated growth,” Murphy said.

“Patrick is an outstanding business lawyer. He is very bright, and has a style that is effective in developing strategy and legal alternatives while keeping in the mind the practicalities of a business situation,” said Mike Brown of Stradling Yocca. “Simply said, he is one of the best lawyers I have ever had the pleasure to work with.”

According to the American Diabetes Association, nearly 26 million children and adults in the United States (8.3 percent of the population) have diabetes, and approximately 19 million people are undiagnosed.

Through his efforts at Dexcom, Murphy is helping to make “things as they ought to be” -- in other words, so much better -- for people with diabetes.