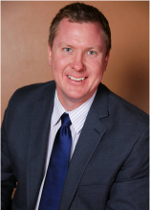 March has been Gary Peterson's lucky month when it comes to his career.

In March of 2003, he founded gap intelligence, a 35-employee company in San Diego that provides timely, accurate business data to information technology companies and consumer electronics and home appliances manufacturers.

"We'll tell Cannon what Sony is doing in the digital camera world," via marketing information such as pricing, promotion and product distribution, Peterson said.

The 41-year-old Peterson, who is also Gap's chief executive officer, was born in Alamogordo, N.M.

An "Army brat" who lived in El Paso and Fort Worth, Texas, and New Jersey, he earned his degree in marketing from Texas A&M University in 1995.

"I wanted to have a unique path for a career," said Peterson, whose expat dreams came true in the form of a six-month internship with DynCorp International Inc. in Kuwait.

"I loved it," said Peterson, who managed an information technology workshop.

That opportunity took him to Fort Worth, but after a period in the Lone Star State, he realized it was time for something different.

In 1998, Peterson told his boss that he wanted to live in San Diego -- and that's where he ended up.

One year after its launch -- in March -- the company's fortunes grew. "Two clients turned into six," he said.

In spite of the recession four years later, Gap Intelligence was growing 20 to 30 percent annually through 2008.

Along with such success lies an even bigger hurdle: staying one step ahead for gap intelligence clients, in part so they can compete in a tech world where the tablet and smartphone rule, especially in photography.

"The good news for gap is we have up to 100 percent penetration of the markets we follow," Peterson said.

Peterson describes Gap Intelligence as a culture-driven -- one example of that is "Gap University," which allows staffers to learn about non-work topics -- and values-led company, which volunteers its time toward charities, such as San Diego Food Bank and Father Joe's Villages.

Peterson himself serves on the city of San Diego Small Business Advisory Board, and was recently elected board chair of the Emilio Nares Foundation, an organization that supports the families of children with cancer by providing transportation or other basic needs.

"For me, it was an instant connection to be involved with it," said Peterson, who added the foundation is hosting a fundraising golf tournament on May 2.

Heidi Cramer, the foundation's development officer, praised Peterson as "a strategic thinker, visionary, great leader and mentor to all of us."

"He is taking our small nonprofit to new heights, and we are excited and honored to have him on board," she added. "He's got a big heart; he cares about his team and the community."

On the personal side, Perterson is a self-described "gardening nerd."