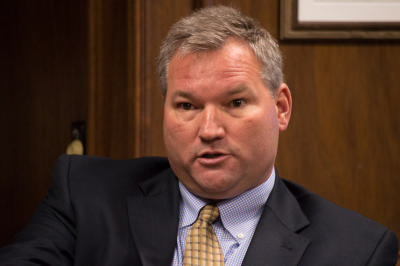 In order to adapt to a changing business world, law firms are getting leaner, more flexible and increasingly efficient, according to a recent Daily Transcript roundtable discussion.

The change is being forced by clients, who are becoming less willing to dedicate a large portion of their budget on legal expenses as the economy continues to recover from the recession.

The result has been a re-thinking of the legal model and the emergence of boutique firms stacked with talented attorneys who have emigrated from the traditional "big law" model.

"I think there's been a sea change in the marketplace, and there's a real opportunity for firms of a smaller scale that have a willingness to try new things and innovate and not be afraid to fail," said San Diego attorney Sean Southard, a founding partner of Crosbie Gliner Schiffman Southard & Swanson LLP (CGS3).

Southard was one of five partners who left Allen Matkins Leck Gamble Mallory & Natsis, an AmLaw 200 firm, to build a relationship-based, client-first commercial real estate practice. Their goal is to offer the quality services of a big law firm with the reasonable rates of a mid-sized firm.

CGS3 is able to minimize its costs by leveraging technology to lower its overhead and improve efficiency. The firm creates and files documents electronically as it maintain a paperless office, and the firm outsources most of its non-legal operations like accounting, human resources and marketing.

"Fortunately there's lots of really good legal talent available now as a result of the recession, and all the layoffs and the deleveraging the bigger law firms have done," Southard said. "We [CGS3] embrace those people. Those are the folks that have the experience that we can build that bench strength with quickly and not have to have them on the payroll all the time."

A lot of law firms are turning to alternative billing arrangements in an effort to be more affordable, and therefore attractive, to their corporate clients. The options can include a flat fee for some services or a monthly retainer-type arrangement, to give the client some certainty as to what their legal costs will be.

"We don't want surprises, so we're doing it [alternate fee arrangements] more and more," said Denise Jackson, general counsel for AMN Healthcare. "We have found that most of the law firms are really receptive to it."

But having low prices isn't enough.

"You want to be hired because you're the best person for the job," said Mike Brown, a Stradling Yocca shareholder in San Diego, adding, "For me it's always about value. It's always about a feeling of partnership and collaboration.

"I meet lots of clients that are very frustrated with getting very large bills [from big firms] and having nobody to talk to and no empathy with respect to those bills."

"The pricing, as important as it is, is a dangerous path if you get too crazy about it because all of a sudden there's always going to be someone less expensive in town," he said.

Business owners don't just want a low price either. They want to build a strong working relationship with their attorneys, as well.

Romy Loseke, the general counsel for Westcore Properties, said it's helpful for both parties -- the client/company and its outside counsel -- to set up expectations and a strategy beforehand, detailing everything from the billing rate to how many people should appear in court.

"It sets the relationship right from the inception," she said. "And we are very much relationship-based with our attorneys. We like to work with people we know, who we feel comfortable with, whose billing style we know and understand. We'll keep going back to those folks because there are no surprises."

Boutique firms are finding there's also value in encouraging their attorneys to be entrepreneurial -- a spirit that isn't necessarily nurtured in the halls of the larger legal offices.

"There's a disconnect between the partner actually handling the file and how management is structured," said James Lance, a partner with the San Diego firm Kirby Noonan Lance & Hoge LLP. "And that internal conflict really prevents some of that creativity. I think that flexibility is something general counsel is looking for now."

In-house counsel, who are part of a company's management team, are increasingly being encouraged to show their creativity, especially those attorneys employed by startups and tech companies.

"Your job is to protect the company, but not stand in the way of the entrepreneurial spirit of the company," said Westcore's Loseke. "The job is to get the deals done in the best way. I feel our [outside] lawyers are coming along with us in a way that they're not compromising the advice they give us. They're just more open and entrepreneurial."

Some of the creative thinking, combined with technology, has led to a smarter, more efficient use of resources.

Tablet computers, laptops and smartphones allow attorneys to work from just about anywhere, freeing them from the constraints of a 9-to-5 office schedule.

"Technology allows people flexibility," said Damian Dolin, a shareholder in the San Diego office of Pettit Kohn Ingrassia & Lutz. "It allows people to create their own schedule as long as they're able to get the work done. I think technology is great that way -- it allows flexibility without compromising the product."

That same technology has expanded access clients have to their attorneys, which is increasingly important in the current 24/7 business environment.

"Business doesn’t take weeks anymore," Loseke said. "These deals are moving fast, and so the challenge for in-house counsel and outside counsel is to recognize your client's needs and move with it.

"The pace of business right now is incredibly fast, and you can't change it. Our lawyers know we will unfortunately call them on a Friday and ask for something on a Monday."

The smart law firms understand this and try to be as responsive as possible, no matter the hour.