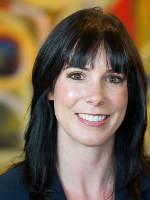 When she’s not reeling in clients, Kelly Souza, senior vice president and manager of the Wells Fargo Commercial Real Estate office in San Diego, is reeling in fish. The avid commercial deep-sea fisher loves a challenge and an ever-changing environment, which makes both her professional and personal endeavors a great fit.

“For me, I really liked being able to touch it and see it and feel it and walk the real estate and watch my construction loans transition into completed buildings. I liked doing something that I perceive to be beneficial to the residents of the area that I live in.”

The Peoria, Ill., native who grew up in Scottsdale, Ariz., before moving to San Diego to attend the University of San Diego, said she’s taken a pretty straightforward route to her current position, rising through the ranks of Wells Fargo’s training programs under the wing of her mentor, Jeff Reed.

Now six months into her role as senior vice president, in which she oversees a team of relationship managers in charge of prospecting and servicing existing clients and underwriting all the loans that the commercial real estate group makes in San Diego, Souza said she still loves what she does, though it’s very different now than when she started in the business just 10 years ago.

“It’s nothing like it was when I started here,” she said of the San Diego commercial real estate market and Wells Fargo’s role in it.

“I think our clientele is getting to be a lot more sophisticated and institutional," she said. "When I started here, we primarily did recourse lending and it was predominantly construction lending. And there’s not a lot of constriction anymore to be honest with you, so not only has our clientele shifted to become more sophisticated and more institutional, our book of business has transitioned from being more construction-oriented to more standing-loan-oriented.”

In addition to these industry changes, Souza said Wells Fargo’s internal model has also shifted from servicing only San Diego-based clients to underwriting all the deals for commercial real estate in the local market, which is increasingly from national institutional investors. She said the work environment is more fast-paced and more efficient, with the office having 40 percent fewer personnel than a decade ago, yet a book of business twice as large.

Souza, who said she particularly enjoys developing young talent and the “people” aspect of her job, takes pride in transitioning the office into the “really good core group of people that work together well as a team and have a lot of chemistry and synergy,” that it is today.

On a market level, Souza said apartment and office are the primary asset classes her office has seen recently, though multifamily construction will be the way of the next few years, for better or worse.

“There’s a huge boom of multifamily going in downtown, which is a little nerve-wracking,” she said. “They’re nearly doubling the supply of multifamily housing in downtown in the pipeline over the next three or four years, so there’s a lot of scrutiny over that…There’s no proven demand for it.”

She said the 2009 Vantage Point project, which was delivered as rentals because it failed on the market as condos, effectively created a 5 percent drop in rental rates and 10 percent increase in vacancy rates when those 690 units flooded the market.

“That was 600 units. We have 4,000 units in the pipeline downtown,” she said, pointing out that the entire existing apartment supply now is roughly 5,000 units.

This change in development type is being met with a consolidation in the industry, both on the client front and banking front. Souza said she predicts a lot of Wells Fargo’s competitors will pull out of San Diego and move toward a regional hub model where they service San Diego from Orange County or Los Angeles.

In addition to the busy downtown area, Souza said Sorrento Valley has been particularly hot, with a lot of creative office redesign concepts on the table, and Otay Mesa is primed to see some industrial growth. These areas stand out in terms of growth, though she said she doesn’t foresee any geographic areas of decline.

As far as her own future, Souza said she’s enjoying this relatively new position, and doesn’t quite know yet what her future will hold -- though she would like it to be in San Diego.

“I love San Diego. I think that’s my biggest challenge and one that I was really facing prior to being promoted to office manager here, was the reality that if you want to continue in your corporate career, you have to move on,” Souza said. “And the thought of moving outside of San Diego was a bitter pill to swallow. So I feel very fortunate that I was able to extend my stay here and continue to grow and learn myself. Where that takes me, I don’t know.”

One place her future will certainly take her is the open ocean -- after all, the 150-pound yellowfin tuna she caught is nice, but she still has her eye on a 200-pounder.

June 17, 2013 -- George Chamberlin speaks with Steven Bernstein, senior vice president of the greater San Diego area for Wells Fargo Bank, about how the economy has improved and lending has picked up.