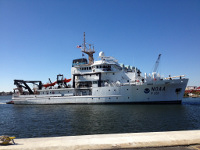 NOAA Fisheries’ new fishery survey vessel, Reuben Lasker, the most advanced technology platform for monitoring fish, turtles, marine mammals and oceanography, will be placed in active service Friday. NOAA will officially commission the ship at the Navy Pier, close to the ship’s permanent port in San Diego, on the 10th Street Terminal today.

The Reuben Lasker arrived in San Diego on March 29 after traveling 5,000 miles from Norfolk, Va., and through the Panama Canal, a 20-day journey. This distance is a pittance compared to the miles it is expected to rack up as a platform for researching fish, marine mammals and turtles off the U.S. West Coast and in the eastern tropical Pacific Ocean.

“The addition of the sophisticated Reuben Lasker to our fleet of modern fisheries research vessels on the West Coast amplifies our ability to understand the ecosystem and inform wise management of its resources,” said John Stein, science director of the Northwest Fisheries Science Center in Seattle. “Together with the NOAA ship Bell M. Shimada, we now have the capability to build highly refined stock assessments for valuable West Coast fisheries, and conduct ecosystem and species-specific studies to support healthy and resilient coastal communities.”

Built by Marinette Marine Corporation in Marinette, Wis., from 2010 to 2013, Reuben Lasker is quieter than other research vessels, which allows scientists to study ocean life without affecting their behavior. This is useful, for example, when studying where fish live.

“The fishery survey vessel Reuben Lasker is designed to produce so little sound that our scientists can survey marine species without disturbing the animals' behavior or compromising the capabilities of our most sensitive acoustic equipment,” said Richard Merrick, chief scientist for NOAA Fisheries.

The ship also has several acoustic technologies that can identify the shape, type and mass of fish schools, as well as map the ocean floor. Her dynamic positioning system accurately holds the vessel in a fixed position so scientists can more easily deploy their equipment -- trawls, longlines, plankton nets, oceanographic equipment and other gear -- to collect samples and data. Scientists can process data and samples on-board in the five laboratories, providing enhanced efficiency.

The 24 staff, command and crew on-board Reuben Lasker support more than just science. That’s 24 new jobs in San Diego, 24 more professionals contributing to the community. “We look forward to a long relationship with the Lasker and her command and crew,” Werner said. “Together, we will provide an integrated view of the California Current's ecosystem and address the challenges and emerging issues facing our marine resources.

Reuben Lasker replaces the last NOAA Ship stationed in San Diego, David Starr Jordan, which was retired in 2009 after logging more than 1.5 million miles during her 44 year tenure off the West Coast.

“The fisheries survey vessel Reuben Lasker is inspired by its namesake, a renowned and well-loved fisheries scientist with a passion for his research and those who worked with him,” said Roger Hewitt, assistant director for ships at the Southwest Fisheries Science Center in La Jolla.

“Reuben conveyed a sense of joint purpose, that the mysteries of the sea could only be addressed by a multi-disciplinary team. The design of Reuben Lasker embodies this spirit. Reuben would be proud, even if he got a bit seasick.”