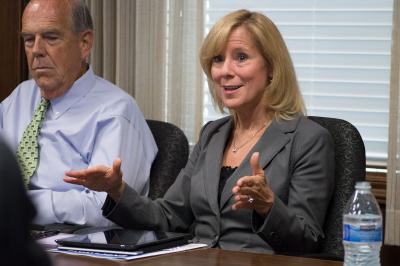 The maritime industry has made strides to be a larger voice in San Diego, but greater strides need to be made, according to a panel of executives at an April 23 roundtable discussion sponsored by McKinney Advisory Group and held at The Daily Transcript.

Peter Quinn, corporate real estate adviser for McKinney Advisory Group and a board member of the Maritime Alliance, said that a year ago, “no more than a handful of policy influencers would have used the term [maritime] in a talk or speech, but it’s clearly part of the conversation.”

Now, the challenge lies in training local students in the industry and getting qualified workers to come to San Diego and stay here for the long haul.

“We can’t grow our businesses unless we have the right kind of folks to take those [maritime] jobs,” Quinn said. “And for the most part, they are well-paying jobs.”

“We struggle to get some of the top talent in some of these engineering disciplines because it doesn’t look attractive to them,” Ward said.

San Diego is considered a place to retire as opposed to start your career by most engineering schools, said Mark Lambert, president of IDE Americas Inc., a water treatment company.

He also said California cities are at a disadvantage to places in Texas that border the Gulf of Mexico because of drought issues.

David Millar, president of Fugro Pelagos, an offshore surveying company, said his company is hiring again now that the recession is over, but that it is still hard to find qualified employees locally.

“We often do national searches and when we find the right candidate, it’s very hard to attract them to San Diego,” Millar said. “It’s really a cost of living problem.”

Brad Fisher, western regional sales manager for SEA CON, a manufacturer of underwater marine electric connectors, said engineers will usually go to work in the oil and gas industry and can make 50 percent more in places such as Texas.

“Oil and gas is driving everything,” Fisher said. “It’s a huge player in all of this.”

Lambert added that Texas has its governor lobbying for corporations, and employees don’t have to pay state income tax.

To improve the training and skills necessary for these maritime jobs, Linda Kurokawa, director of Mira Costa Community College, said it takes the private sector to let educators and school executives know the types of classes and materials needed.

But it also takes money to get new things. Kurokawa applied for and recently received a grant from the U.S. Department of Labor’s Trade Adjustment Assistance Program for $2.75 million.

“The thrust of that grant was to allow us to expand our manufacturing and add robotic automation, electrical and mechanical hydraulics as a core course to train technicians,” Kurokawa said.

Mira Costa is working with California State University San Marcos to implement a bachelor’s degree in mechanical engineering for technicians who wish to continue their studies at a four-year institution.

Rick Timm, president at SeaBotix, a manufacturer of underwater robotic equipment, said there need to be universities and colleges in San Diego that offer degrees in ocean and marine engineering.

“There are other colleges around the world that offer these kinds of degrees, but not in San Diego,” Timm said. “I think we need to attract students here with these types of degrees and expose to them that San Diego is a place you can start your career.”

Miller said young professionals out of college will start small businesses in San Diego and other parts of Southern California, but they move when they learn more money can be made elsewhere, or get bought out by a larger corporation.

“They grow out of the region,” Miller added.

Quinn said his fear is that students at local colleges and universities who are educated by new programs geared toward the maritime industry will leave, because public policy is driving jobs out of the area.

“If it takes 12 years to get a desalination plant approved in San Diego … but in Texas it can get done in three years, where is the technology and resources going to go?” Quinn said. “If public policy will not allow us to actually demonstrate how we can deliver these new (projects), we are going to shoot the golden goose. And that’s frustrating.”

Norm Miller, professor at the University of San Diego, suggested that city governments should create subsidies to encourage new maritime businesses -- such as fish farming -- and not for industries such as craft beer, because the blue industry can create higher-paying jobs.

Don Kent, president and CEO of Hubbs-Sea World Research Institute, said the problem is not within government agencies, but in public environmental reviews. These review boards don’t know what a marine farm is or what a desalination plant does. Kent added that lawsuits can delay a project for several years.

Kent said the San Diego region imports 91 percent of its seafood and that more fish farms are needed locally.

“Because we are next to the ocean, because we have a Mediterranean climate, because we have a mild ocean environment, there are certain things we need to do here because you can’t do them in other places in the U.S.,” Kent said. “You can’t go to Iowa and grow saltwater fish. You have to do it here.”

Another advantage Southern California has over states that border the Gulf of Mexico is the zero threat of hurricanes. Kent said this should encourage companies to build offshore businesses locally and government agencies to create incentives for the blue industry.

“We have 37 million people in the state,” Kent said. “They require a half a million metric tons of seafood a year. Now, instead of relying on China or Brazil or Ecuador or wherever to grow our seafood, we can grow it ourselves.”