From crunching numbers to running her own salon

By SAMANTHA HENRY, The Daily Transcript
Wednesday, May 21, 2014 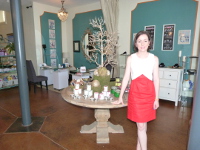 Elizabeth Morris quit her job as a financial analyst to open the salon. Staff photo by Samantha Henry

Elizabeth Morris shocked her parents and colleagues when she left her corporate job in pursuit of creative freedom as the owner of Va-Va Varnish Salon.

“People were really surprised when I left. I was highlighted as one of the fastest up-and-coming people at that company,” Morris said.

Morris worked at Broadcom (Nasdaq: BRCM) for almost seven years in financial management for the high-tech company after graduating from the University of Colorado Boulder with a finance degree.

She initially studied electrical engineering, feeding the “tech geek” part of her personality and honing in on her attention to detail.

She quit her job in September 2012 and opened Va-Va Varnish that October. Her background in finance enabled her to get funding and create her own three-year plan, jumping over one of the biggest hurdles for many small-business owners: understanding how to run the business, Morris said. 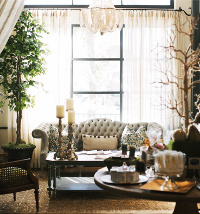 Morris found a niche in the nail salon industry, offering guests a cozy environment that is more reminiscent of a living room than a standard salon. Photo courtesy BAM Communications

She manages all of the salon’s financials and was able to break even and become profitable within a year of opening.

Morris said she works more now than she did at Broadcom, but that it’s more rewarding because of the control she has.

“It’s like your baby and you get to see it grow. You get to be a part of it one on one more than just being a piece of a giant puzzle,” Morris said.

Sometimes she misses the security of her previous job, but most days she loves what she’s doing.

Morris has been working at being a better manager and leader for her staff of 10.

Her husband, Hermann, who works in management, has coached her so she can make her employees feel as much a part of the company as she does. She trains all of the nail techs on how the business works -- including making orders, answering the phone and controlling the cash.

“It’s not just them doing some kind of menial labor. They actually get the experience of running this place, too,” Morris said.

Morris isn’t one of those entrepreneurs who always knew she wanted to be her own boss. She says she’s incredibly risk-averse and prefers everything to be structured and planned out.

“This has been a huge learning opportunity for me because everything is different every single day, which is definitely challenging for me,” Morris said. “But it’s also something that I think has made me a better person and a better entrepreneur in general.”

Painting nails had been a hobby of Morris’ ever since her mom caught her with paint all over her fingers when she was 2 years old.

“I find nails very interesting because it’s so technical. It’s everything on a very small scale. You’re working on a very tiny canvas; therefore, everything has to be very detailed,” Morris said. “I think that speaks to my engineering background and numbers background -- just keeping that detailed focus.”

Morris said her salon fills a void for customers who are willing to pay extra for a better, cleaner experience. Her Market Street salon feels cozy with couches and comfortable seats, and at first glance it’s hard to tell whether it’s a salon or your best friend’s living room.

“I think a lot of people out there that want to get their nails done are kind of sick of going to dirty places or noisy places or confusing places, and this addresses all of those things in one,” Morris said. “It allows people to come to a nice, luxurious environment. It allows people to have the intended experience with nails, which is something that’s fun but it’s also something that’s clean and healthy for you.”

She uses an autoclave to sterilize the salon’s metal equipment, and anything that can’t be sterilized is thrown out after each use. Her prices are higher than an average nail salon, with packages ranging from $17 to $47 for a manicure and $33 to $63 for a pedicure.

Her market tends to be those aged 35 and up, and people who “are tired of being hurt, burned, cut and getting infections.”

“There’s a big difference between eating at Denny’s and having quick food that’s $5 a plate, versus eating in a fine-dining experience, where there’s fine wine and the experience of having a really nice server and maitre d’ -- that’s what I’m trying to do here,” Morris said. “I’m creating something that’s not just getting your nails done because you like getting your nails done and you have to -- but creating an experience every time you come.”

Now, less than two years after opening, Morris is trying to decide what her next step is. Her options include opening another salon, but what she’s really passionate about is opening a school and educating future nail techs.

Va-Va Varnish educates the consumer on what an experience at a nail salon should be like, and teaching would allow Morris – a certified nail educator -- to put well-equipped technicians in the industry to prevent bad experiences from happening in the first place, she said.

“It would allow me to change the industry from the inside,” Morris said.