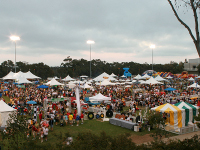 Picnic People, a local outdoor events company, celebrated its 30th anniversary yesterday. The company specializes in picnics, tailgate parties and corporate team-building activities, such as this one organized for Qualcomm (above). Photo courtesy Katalyst PR

Picnic People began as an idea by founder Lisa Richards in 1984 while she was attending the University of San Diego. Richards found inspiration for the company while riding her bike through the picnic areas of Mission Beach one sunny afternoon. Richards quickly developed the concept and established the company within a year.

“I sometimes have to pinch myself when I think about where we started as a company and where we are today. I owe it all to our loyal clients, many of which have made our picnics a yearly corporate tradition.” Richards said. “Southern Contracting, my oldest client, has picnicked with us since we launched in 1985, and I’m proud to call Qualcomm our client for the last 14 years.”

Richards also attributes the company’s success to her staff. The company has a commitment to provide employment opportunities to students and young adults, and hires more than 700 part-time employees to staff their events each year. The company’s president, Frank Christian, began his career with Picnic People in 1992 as a part-time worker while attending San Diego State University.

Picnic People is a supporter of a variety of local charities. Richards estimates that Picnic People annually contributes more than $500,000 in food, equipment and services across the county. After events, Richards and her team also routinely visit the San Diego Rescue Mission to donate usable picnic foods and utensils.

The company celebrated its 30th year in business with a picnic at its warehouse in Miramar and a proclamation from the City Council that May 21 is “Picnic People Day” in San Diego.