By KATHERINE CONNOR, The Daily Transcript
Wednesday, May 21, 2014 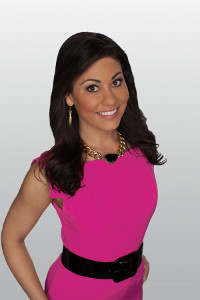 Meteorologist. Business owner. Pilates instructor. Janitor. CFO. It’s all in a day’s work for Kimi Evans, morning meteorologist and traffic reporter for San Diego 6, and owner of Pilates Plus Pacific Beach and PushHouse, a Pilates, pedal and barre studio in Encinitas.

Her tip for working a full-time job and running two businesses on the side?

The Hawaii native who grew up in Los Angeles took an unusual path to both careers, but said all the pain, sweat and tears -- literally -- have been worth it.

“When I first opened Pilates Plus PB, for three months my TV job and my Pilates studio overlapped, and, mind you, the learning curve was completely vertical because I hadn’t opened a business before, and so it was just crazy,” Evans said. “I was still trying to learn how to do it all and run that business while I had a full-time job. I got shingles because I was so stressed. I remember crying a lot, freaking out a lot -- it was pretty overwhelming at the beginning. I can look back now and laugh a little, but it toughened me up, for sure.”

Tough might not be a strong enough word. Evans recalls many times when she would spend her mornings working on the new business and teaching classes, then run to the TV studio for work (at the time she opened her first studio she was an evening weather reporter), spend her dinner break in full makeup and dress checking in clients for classes, head back to the TV station, and then go back to the Pilates studio in the middle of the night for one emergency or another.

She said she finds people’s perceptions of her work life hilarious, given the reality of this chaos.

“One time there was a leak, the ceiling tiles were all over the place on the floor and I had a friend meet me at the studio at, like, 12:30 at night and we were mopping till 3:30 in the morning cleaning it all up,” Evans said. “I’m the janitor -- I’m on TV with all my makeup on, and then I’m also a janitor, because that’s what you do when you own a business.

“And people are always like, ‘Your job is so glamorous!’ Ha! Even just in the TV business we think it’s so funny when people say that, because we get what they’re saying, but if you saw what we did during the day it would not seem glamorous at all, so it’s funny.”

Evans, who studied business and Japanese at the University of Southern California, took a job as one of two Japanese-speaking casting directors in Los Angeles right out of college, before transitioning into a well-paying pharmaceutical sales career. She said she always kept a memory of staying with a friend who was in broadcasting in Hawaii in the back of her mind -- the job seemed so interesting and so in-line with her personality.

After several years of pharmaceutical sales, she took the plunge. She quit her job, took an internship at a cable network and simultaneously began online meteorology classes at Mississippi State University. While in Hawaii for a wedding, she spontaneously visited several local news stations, and was shocked when the job offers started rolling in just one month into her internship.

After working at the Fox-affiliated station in Hawaii, she moved to CBS/KCAL in Los Angeles, where she first discovered Lagree Fitness, a combination of Pilates, weight training and cardio meant to be gentler and safer on the body. Evans has several neck and back injuries from accidents while commuting in her sales locations of Los Angeles and Honolulu, which are the two worst cities for traffic in the United States, according to the annual INRIX Traffic Scorecard.

She entered into a licensing agreement with Lagree to open a studio in the Westwood area of Los Angeles with a business partner, but found space constraints and regulations too inhibiting. Roughly one and a half years into her job at the station in L.A., she decided she needed a change, and was offered a job at San Diego 6 as an evening weather reporter.

The TV station asked her to come back in January 2013 for the morning show, and she opened the second studio, PushHouse, shortly after. Though she knew the drill this time, she said it was still a challenge because she had bought out her business partner, who was now married and starting a family and could no longer travel back and forth so frequently.

“It used to be two people running one studio, and now it’s one person running two studios, so obviously my time at the studio has sort of quadrupled along with a full-time job, so there’s a full-time challenge,” she said.

Though opening the studios has had its challenges, Evans said San Diego has been a much more welcoming environment than Los Angeles.

“I found San Diego to be much easier than Los Angeles,” she said. “I think it was because of the location I was in in L.A. -- Westwood was difficult because it was working with big corporations versus mom and pop people, so that was a challenge. Also, parking restrictions in Westwood were ridiculous. There was a parking structure, but they would require you to have a certain amount of parking and they wanted to charge us $125,000 per parking spot but required us to have one per 100 square feet -- if we had 1,500 square feet, we needed 15 spots -- it’s not logical. It just was ridiculous. So in that sense, I found San Diego to be so much better.”

Since she works at the TV station in the mornings now, getting in at 4 a.m. and staying until 10 or 11 a.m. most days, she is able to teach at PushHouse in addition to everything else on her plate. But she loves it, and said she’s considering plans for a third studio, though it’s too early to mention any specifics. For Evans, if there’s an opportunity available that she’s remotely interested in, there’s no chance she’ll pass it up.