By JAMES PALEN, The Daily Transcript
Wednesday, May 14, 2014 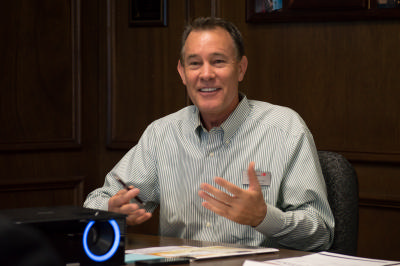 The competitiveness of financing building construction has returned to a more sustainable structure, and the builder's ability to borrow appears easier with improvements in business conditions, the group said.

That competitiveness is a good thing, Steve Cathey, senior mortgage banker with Prime Lending, said, if the market stays as healthy as it is now.

"The reason I say that is it got too easy (before)," Cathey said. "We just went through all this restructuring, and I think the consumers -- and builders and Realtors and lenders, as well -- we enjoy where we're at right now. It is a very stable market. There is money to lend."

Lending guidelines aren't as difficult as some might perceive, he added -- they’re just more reasonable than they were a few years ago.

A market allowing easy lending again is what Cathey fears could thwart the recovery. Guidelines require full documentation for financing today, and that's how it should be, he said.

"It's W-2s, pay stubs, statements, tax returns -- full approval," Cathey said. "Some of the banks have a little tougher time because they have more overlays on top of the guidelines from Fannie and Freddie. That makes the process a little bit longer and a little more difficult, but you can still get through it."

In looking at what type of building is attracting the cash, California Bank & Trust Senior Vice President David Bale said the boom seen in 2013 for multifamily housing is likely to continue, but perhaps with an inevitable effect on the market.

Bale added that while the building of new apartments will continue for now, the cost of rent -- which he said is "really pushing into the stratosphere" -- could be a warning sign of too much of a good thing, as several projects are in the development or planning stages throughout the county.

"I would be concerned if we shift from that rent-by-choice to prefer-to-own," Bale said. "Rents either need to flat-line or go down, or condominium prices need to go up. They're very directly correlated."

Chuck Salas, senior underwriter with Seattle Funding Group, said that when describing the stage of recovery in the market, the stage differs based on which element of building is being discussed.

On the coast, the market could be in the later stages, but inland markets might be catching up despite their own improvements.

"We may be in the sixth inning at the coast and at the second inning at Menifee," Salas said. "Some of those trailing, more entry-level markets may not get into the later inning before the fragility of the market impacts them from the buyer's standpoint and the ability for them to qualify with interest rates."

Overall, Terry Wardell, president of custom homebuilder Wardell Builders, said the "gun-shyness" seen even up through last year is starting to dissipate.

"My business is based a lot on people feeling good," Wardell said.

It wasn't until about six months ago that Wardell noticed a widespread change in mood, in favor of moving forward on home builds or remodels that had been tabled or postponed for a few years.

"You're starting to see the numbers," Wardell said. "Architects in town are starting to get very busy, and they weren't 12 months ago. It's not that the cash wasn't out there. It was the desire."

It's a feeling of immediacy, he added, that wasn't there before.

Thomas Farrell, director of building lending at Sabal Financial Group, said that in light of improving desire to complete construction projects, it's margin compression that concerns to him.

"Costs are going up, and they're not going to get the appreciation," Farrell said. "One thing that I continue to see builders do is use appreciation to justify their land acquisition prices. It's lending 101 -- should be homebuilding 101 -- not to do that. The greatest violators of that golden rule are the public homebuilders, who are more top-line oriented and driven to drive revenues."

Those practices can hurt everyone, he said, pushing land prices up.

"The next thing you know, that consumer sentiment goes away," Farrell said.

Salas said that since the consumer confidence has potential to be swayed by any number of unforeseen or even global events, the way forward is to simply continue lending responsibly -- keeping with what he knows is reasonable in the market and steering away from "ridiculously high" prices seen on some properties.

He said that in one West Los Angeles community in which Seattle Funding works -- where it's not unusual to see properties trading at $2,000 or $2,500 per square foot -- he received an artificially high-priced request to finance a property at $3,000 per square foot as a "fix-and-flip."

Seeing those types of requests answered by lenders in San Diego would concern him. The way to avoid that from happening is to just decline the client request, Salas said.

"We don't want to be chasing those levels," he said.

Bale said that while he's not especially concerned about the local market, given that there's a good balance right now between debt and equity sources being used in rational ways, he's keeping in mind that cycles normally repeat themselves.

"The proper balance of debt and equity makes good, sound sense from a commercial bank, but what eventually happens, again -- too much of a good thing -- is then you start getting lenders from all over the country that have pushpins on their map, coming to San Diego.

"The Midwest banks all came in the early 2000s, the (Washington Mutuals) of the world all came in and really started pushing the envelope on debt financing. My concern is that eventually could happen again."