By Tony Lovitt, Special to The Daily Transcript
Wednesday, May 14, 2014 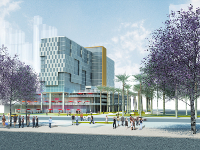 Groundbreaking took place May 8 for a project that will create a 253-room SpringHill Suites, a 147-room Residence Inn, approximately 27,000 square feet of retail space, more than 400 parking spaces and a public park at Lane Field along downtown San Diego's North Embarcadero.

For Rob Lankford, president and CEO of Lankford & Associates, who eight years ago began the quest to obtain a ground lease option from the Port of San Diego and assembled the consortium that will build and manage the project, the groundbreaking was greeted with a mix of gratification, exhilaration and relief.

“My family is involved with me in the business and they've been very patient and supportive, but now we're finally here. It's taken a long time, but it's worth it,” Lankford said. “We expect to be open in the first quarter of 2016.”

Lankford said his San Diego-headquartered commercial property development and management company will team up on the project with Atlanta-based Portman Holdings (managing partner of the entity) and Hensel Phelps Construction (the general contractor) as LPP Lane Field.

“That's the group that took over the option and got the thing financed, and put all the pieces together,” Lankford said.

A team headed by Lankford responded to the Port's first request for proposal (RFP) back in 2006. Another group was chosen but couldn’t negotiate the option, so the Port reissued its RFP. 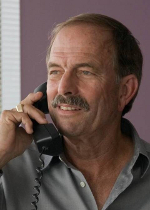 In round two, Lankford secured the option with partners in an entity known as Lane Field San Diego Developers. Initially, plans called for the construction of a large, full-service hotel on the property.

“So, we had an approved project and [the approval of] the Coastal Commission, but we could not proceed because of the recession,” Lankford said. “Several more years passed and we continued to hold the option in [Lane Field San Diego Developers]. But, again, because of the financial situation, nothing was able to happen. And we then put together a scenario with the Port and with Broadway Coalition, which includes some very influential folks that are very concerned about open space along the waterfront.”

Discussions with the previously mentioned agencies yielded a new plan for the property that would include a 150-foot-wide park along Harbor Drive, to help achieve the goal of more open spaces as part of the overall North Embarcadero Visionary Plan.

“That would have never worked on the hotel project that we got approved and were going to build before the recession hit. It would have had such a substantial-sized footprint because of the nature of the hotel, a full-service hotel, with much meeting space,” Lankford said. “We were convinced that the next strategy to deploy was not a full-service hotel, but a limited-service/select-service product which doesn't require such a huge floor plate. The types of services that are provided in these kinds of products are exactly what the travelers now want. A full-service hotel could not be financed, but this project type, this new project type, we felt, could. So, that was a big deal.”

In addition to serving the needs of a wide variety of travelers and visitors, the hotels will be aesthetically pleasing, as well. Lankford said that Atlanta-based John Portman & Associates will provide architectural services, supported locally by Joseph Wong Design Associates.

“You'll see exposed concrete in some areas. You'll see a very interesting articulation of the aluminum-glass kind of wall system that I think is quite stunning,” Lankford said. “We've got some very interesting color palettes that we'll be displaying. It's quite a piece of architecture.”

Lankford added that a good portion of the project's estimated 27,000 square feet of retail space will consist of waterfront-facing restaurants along the west edge of the hotel overlooking the park and the water across Harbor Drive.

“And there will be other smaller facilities ... coffee shops, possibly other more hard-goods retailers, but a fairly good portion of that (square footage) will be restaurants, food and beverage activity,” Lankford said.

The combination of aesthetics, location, a public park, accommodations, restaurants and retail promise to make the soon-to-be-named project a popular destination for San Diego visitors and residents alike, Lankford said.

“I think the city will be thrilled and certainly visitors are going to have a cool place to be,” Lankford said. “They can have great views of the water, they can be close to downtown. It will be attractive to various types of visitors, including business visitors, and otherwise. I think it's going to be a destination spot given everything else -- not only the project itself, but everything else that's around it.”