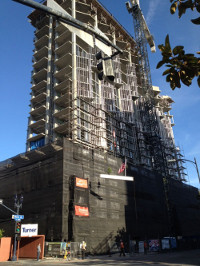 Celadon, an affordable housing complex on Ninth and Broadway, is one of several new apartment projects being constructed around downtown. Staff photo by Carlos Rico

There has been resurgence in new residential construction projects across the county, including several mixed-use multifamily complexes projects currently under construction in downtown San Diego.

There are 26 multifamily projects in and around downtown that have either just opened, are under construction or are in the planning stages, Alan Nevin, director of economic and market research at the Xpera Group, said.

He said there are two reasons for this surge of residential construction projects: A number of out-of-town developers bought sites that were planned for condominiums before the recession, but now they're building apartments; and more local developers see the potential for new housing downtown.

“It’s more of a case where developers that weren’t in this market before now want to be in it,” Nevin said. “More local apartment builders have zeroed in on downtown.”

One of the largest residential projects currently under construction downtown is Pinnacle Park, at the corner of 14th Street and Island Avenue.

There will also be 9,000 square feet of retail space, a gym, pool, spa, outdoor barbecues, five levels of underground parking and a new park next to the residential towers.

The project has an opening date of March 2015.

The largest affordable housing complex in downtown is Celadon at Ninth and Broadway.

This project, by developer Bridge Housing Corp., encompasses 250 low-income units along with 5,200 square feet of retail space in a 17-story high-rise building.

Residents will have access to two community rooms, a community kitchen, laundry facilities and outdoor space, including a resident garden.

The property will also feature a supportive services office and a seminar room.

The project has been designed to be a LEED Silver certified building by the U.S. Green Building Council. Some of the project’s sustainable amenities include an eco-roof with drought-tolerant plants; a photovoltaic system; and highly efficient mechanical systems that are consistent with Civic San Diego's adopted Urban Sustainability Master Plan.

The apartments will be for those with annual incomes of up to $38,700 for a two-person household. Monthly rents will range from approximately $408 to $879, depending on factors such as income, household and apartment size.

The topping out of Celadon took place on May 1 and the affordable housing apartment complex is scheduled to be finished in February 2015.

The Lofts at 688 13th Street is planned as a five-story residential building at 13th Street between Market and G Streets, covering three-quarters of a city block.

Once completed next year, the project will have 208 midrise and ground-level apartments with studio, one- and two-bedroom residences. There also will be two ground-level areas, approximately 2,660 square feet each, for retail space.

In addition, the building will include common areas for residents at the ground floor and at a rooftop deck.

The Alpha Square Apartments is the other large low-income housing complex currently being assembled.

It will have 203 units ranging from 250 to 350 square feet, each with small kitchen facilities. The ground floor of the project consists of a residential lobby, kitchen, multipurpose room, staff offices, computer labs, laundry facilities, restrooms and approximately 5,417 square feet of retail space.

The Alpha Square Apartments, at 14th Avenue and Market Street, is replacing the Hotel Metro, a single-room occupancy hotel. The project, with 76 supportive housing units, is intended for low-income individuals and those at risk for homelessness.

On the outskirts of downtown San Diego is COMM22, a 130-unit affordable family property with 70 units for senior living at 2225 Commercial St. and 690 Beardsley St.

The master-planned development will also feature enhanced plaza areas for public gatherings. As part of the development process, the surrounding area will get significant upgrades such as streetscape improvements, storm drains, water and sewer lines, and buried power lines.

This development is anticipated to complete construction in early 2015.

Nevin expects to see a continuous wave of new multifamily complex over the next several years.

“These waves of new housing projects seem to be coming in an orderly fashion,” he added. “We just had one wave with the completion of projects and now we are in this second wave where projects that are under construction are close to being completed later this year. And we will have another wave in 2015-2016.”