Editor's Note: The figures for this article were gathered from leases submitted to The Daily Transcript and from reports by The CoStar Group. The leases listed here are not necessarily the largest in their categories.

There haven't been many huge leases since the beginning of the year, but some were notable.

The largest industrial lease by dollar value, according to data provided to The Daily Transcript during the first quarter, was AleSmith Brewing Co., which quintupled its industrial space with a $9.7 million, 11-year lease for 105,600 square feet at 9990 Empire St. in Miramar.

The property, leased from locally based Westcore Properties, will undergo substantial renovations before AleSmith occupies it January 2015.

Planned improvements include a state-of-the-art brew house, cellar and bottling line from Krone’s, a leading German packaging and bottling manufacturer.

This past quarter, the Acushnet Co., best known for its Titleist and FootJoy golf brands and clubs, renewed its lease on 163,310 square feet of industrial space at 2819 Loker Ave. E. in Carlsbad from Canoga-Ricon Loker Industrial LLC.

Another large industrial lease during the first quarter involving more than 100,000 square feet was Dr. Bronner's Magic Soaps, which took 118,597 square feet of manufacturing space at 1335 Park Center Drive in Vista for $8.2 million with a purchase option that was immediately exercised.

The soap maker then paid $10.1 million to acquire the building in January. The seller and former lessor was a unit of Rexford Industrial Inc.

Dennis Visser, Barry Hendler and Don Grant of Cassidy Turley handled both the lease and the sales transactions.

Not every lease had a readily accessible value. Defense contractor General Atomics Aeronautical Systems signed a lease for 115,000 square feet under construction at 14105 Kirkham Way in Poway.

The value of the lease, which is tied to leases on existing properties, couldn't be readily calculated.

The landlord, HCP Inc., was represented by Mickey Morera and James Duncan of Cushman & Wakefield. General Atomics represented itself.

The new building is within a block of General Atomics’ existing drone manufacturing facilities at 14200 Kirkham Way. Both are within the Parkway Business Center.

One of the larger office leases in dollars this year was the renewal of LJMG Inc., doing business as First Choice Executive Suites, at 4025 Camino del Rio S. in Mission Valley. 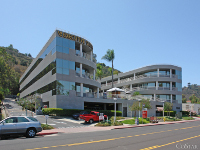 One of the larger office leases so far this year was First Choice Executive Suites in Mission Valley. Photo courtesty of CoStar

First Choice, which has spent more than 16 years at the location, renewed for 65 months for 15,077 square feet at a cost of about $1.54 million overall.

First Choice, which offers about 80 multi- and single-office suites in its flagship location in downtown La Jolla, also has a presence in Rancho Bernardo.

Another sizable office lease during the first quarter of the year was that of Cal-Western Reconveyance to fill a 25,200-square-foot space for 60 months at about $1.53 million at 525 E. Main St., El Cajon.

While most of the office leases didn't appear to be particularly large, there were some notable move-ins during first quarter. These included LPL Financial (Nasdaq: LPLA) taking occupancy of the 414,570-square-foot La Jolla Commons II in the University Towne Centre area, and Qualcomm (Nasdaq: QCOM) taking up residence in the San Diego Tech Center in Sorrento Mesa.

On the life science side, Intertek USA signed an 11-year lease for 46,142 square feet at BioMed Realty Trust's (NYSE: BMR) Wateridge Summit property at 10420 Wateridge Circle in Sorrento Mesa during the quarter.

Intertek is a pharmaceutical services firm that is fully occupying the property. Chad Urie of JLL (NYSE: JLL) is listed by The CoStar Group (Nasdaq: CSGP) as handling the leasing of that asset.

The largest retail lease reported by The Daily Transcript during the quarter was Noodles & Co. (Nasdaq: NDLS) taking 2,837 square feet at the Palomar Airport Commons Center for $2 million and 12 years.

The Palomar Airport Commons has 185,000 square feet that is anchored by a Lowe's (NYSE: LOW) home improvement store.

After the end of the first quarter in May, Bank of America (NYSE: BAC) signed a $1.02 million, 60-month lease for 8,800 square feet at the Fallbrook Plaza shopping center at 1125 South Main St. in Fallbrook.

Bank of America was represented by Kevin Breen of JLL (NYSE: JLL).