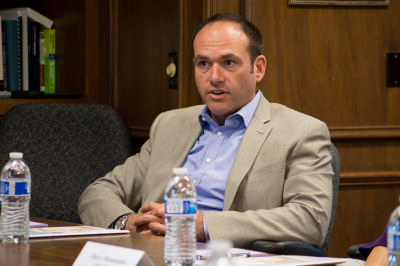 MarketPointe Realty Advisors reported that the average apartment rent in San Diego County was $1,445 per month in March. Industry insiders say that as long as multifamily units are continuing to be constructed, the existing supply can be affordable.

The state of the county's multifamily market was the topic of a recent roundtable discussion at The Daily Transcript offices.

"When you build new Class A apartments, it frees up the B and C," said Robert Vallera, a Voit Real Estate Services senior vice president.

Vallera said the problem is that only 29,000 multifamily units have been constructed in the county since 1998.

Immediately following those boom years in 1987, the San Diego City Council instituted an interim development ordinance that limited residential development to 8,000 units per year. Although the IDO was allowed to expire, neither the city nor the county have been as active since the mid-1980s.

Jim Neil, senior vice president at CBRE (NYSE: CBG), said there was only one residential permit pulled for every seven people who arrived or were born here during the past four years.

Michael Stepner, former city planner and current NewSchool of Architecture and Design professor, said with the population of the county projected to increase by 1 million people within the next 20 to 30 years, it will be difficult to keep up with the demand -- particularly for more affordable units.

Terry Moore, ACI Apartments senior vice president and principal, said a major challenge for apartment developers is that municipalities would much rather see new retail units being constructed instead of multifamily housing.

"Every government wants a Mile of Cars, and they say they don't want apartments," Moore said. "Then again, the state wants us to do our fair share of housing.

"Zoning has made things more difficult and the flat land was developed long ago," Moore said.

Stepner said there are many redevelopment opportunities -- despite the fact that redevelopment agencies no longer exist -- for apartments in locales such as Mission Valley.

"I know of a one-story strip center in Mission Valley and that may not be the highest and best use for that property," Stepner said.

Moore said adaptive reuse could be used to create infill projects that would revitalize a given area, but conceded that he is a bit discouraged.

"San Diego talks a lot about smart growth, but does very little about it," Moore said, adding that groups such as The Sierra Club should promote high-density projects.

Vallera said he also likes the idea of infill.

"Infill sites can justify a sufficient rent for the required parking," Vallera said.

Stepner argued that the issue of parking needs to be considered in a whole new light.

"Requiring two spaces per bedroom is not feasible," Stepner said.

Vallera said that as long as jurisdictions such as Poway, Escondido and the county of San Diego downzone their properties, it will be difficult to develop apartments in many parts of the county. These downzonings, he argues, only serve to make housing less affordable.

Dee Snow, Garden Communities manager of forward planning, whose firm is developing about 2,100 apartments in the Casa Mira View complex alongside Interstate 15 in Mira Mesa, said there will be more than 200 affordable units in the community.

"You could pay in-lieu fees, but our policy is to actually build the units," Snow said, emphasizing that the subsidized units are indistinguishable from the others.

Stepner said something needs to be done about rental affordability in San Diego. He said his daughter found it economically infeasible to remain in either Northern or Southern California and has moved to Colorado.

Higher rents have meant the competition among investors for existing apartment complexes continues to be fierce.

"Multifamily has not seen a slowdown at all," said Marc Iacono, Real Estate Capital Advisors principal/owner. "And money for it is coming from all sources. It's not only FHA and Fannie (Mae) and Freddie (Mac) but big banks and others."

With the apartment market so strong, the panel was asked if there will be a new wave of condominium conversions.

"The condo conversion craze will inevitably return," Neil said, without offering a timeframe.

Christopher Zorbas, a Marcus and Millichap vice president of investments, said the last condo conversion boom, which turned into a condo conversion bust, "was fueled by loose lenders" who allowed people to buy with zero down.

With tighter lending standards today, he doesn't expect the problems during the last conversions to occur in the future.

Although conversions may loom on the horizon, Vallera emphasized that many renters will remain renters by choice. These include millennials who may not want to deal with upkeep of a single-family home. He added that empty-nesters are creating another demand on apartments when they downsize from a single-family home.

In some parts of the country it has been argued that it is cheaper to buy than to rent. Miramontes said that isn't the case here.

"Buying versus renting narrowed during the recession, but now the gap is widening again," Miramontes said.

As for those who can't afford an apartment or a single-family home, Moore stated a simple fact.

"Not everybody can live in San Diego."