Maximizing Value and Resources: The Benefits of Hiring a Construction Project Manager

The value of a construction project manager is mistakenly overlooked by many owners -- until major problems threaten to turn their dream project into a nightmare.

Clients view KCM Group, which represents owners as their project manager, as a valuable staff extension resource in today's post-recession economic environment. Firms like San Diego-based KCM Group help clients face this challenge by getting the work done without having to make an immediate commitment to hiring more staff.

"It has become increasingly difficult for owners to see beyond the next six months, let alone make longer-term plans. Hiring specialty consultants to manage overflow offers a wonderful hedge should the economy change," said Gordon Kovtun, principal of KCM Group. "In fact, we have had several clients continually employ this cost-cutting method by not only utilizing our project-management services, but also by utilizing our variety of staff experts as an extension to theirs."

In addition to providing support through staff extension, KCM Group is often called upon to take charge of distressed projects that are over budget, behind schedule or plagued by mismanagement, Kovtun said. The firm's project-management team restores financial order, and in some cases gets refunds for owners.

"Owners save time and money when they hire a project manager to represent them at project inception. It's all about anticipating and avoiding problems," Kovtun said. 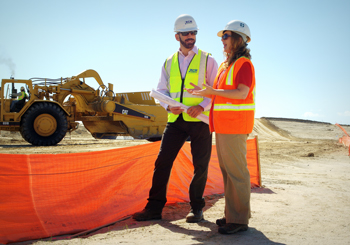 By resolving conflicts within the design, an owner's project manager ensures coordination among design disciplines and corrects problems before they occur, he said. The result is a streamlined schedule, with cost controls and fewer change orders.

"Our primary client base is project owners, and whether that's a major land developer, custom-estate owner or a commercial-development client, inevitably we save the owner money," Kovtun said.

In another case, a La Jolla custom-estate owner was paying $700,000 a month for a project, despite it being idled for months by design conflicts. Within a week, KCM Group resolved the conflicts, got the project moving, and imposed cost controls and a rigorous construction timeline.

Kovtun said design conflicts are common among contractors, architects and other consultants, and are best mediated by project managers with experience in building codes, permit conditions, value engineering and best-construction practices.

Project managers also simplify the owner's life by serving as their single point of contact with all trade disciplines working on the project.

"We're the only entity on a project whose sole interest is representing the owner," Kovtun said. "Our job is to make sure everyone else does their job."

KCM Group offers a diverse suite of services, with expertise in land development, commercial and custom-estate construction, environmental compliance and litigation support that it mobilizes on behalf of each client.

Founded in 2000, KCM Group has $3 billion in land-development, $250 million in commercial-construction and $150 million in custom-estate experience.

Gordon, I always enjoy reading your newsletter and hearing of your continued success and diversification. Perhaps we can reconnect soon. Don Kramer