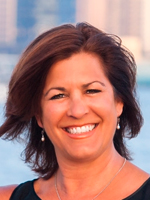 Living and specializing in Point Loma have worked out well for Diane Sullivan, broker associate at Pacific Real Estate Group. In a time of tight housing inventory, she completed 24 transactions last year.

"So far, I've had fewer transactions in 2014, but the price points are higher," said Sullivan, who has lived in the Point Loma area since 1985 and worked in the industry since 2004. She joined Pacific Real Estate Center when it opened three years ago and has been a part of its growth from four agents to the current 10, including broker Markus Feldmann.

"Inventory" is a word that pops up regularly when Sullivan discusses the Point Loma/Ocean Beach area. It's a regular topic of conversation among Realtors throughout the county, but housing stock is particularly low in desirable coastal communities. Still, Sullivan is not dismayed about her prospects for the rest of the year.

"Asking prices in the communities range from about $250,000 for a small condo to $6 million for a hillside-view home," she said. "And there are plenty of interested parties, including out-of-town buyers looking to move or purchase a second home.

"People seem to be more interested in selling for a lot of reasons, partly because values have appreciated enough to where it makes sense for them to sell," she said. "We still don't have nearly enough inventory, though. I've got clients who've been looking for months and end up making offers along with several other buyers. The market is still very competitive.

"Even though it is a seller's market, sellers still need to be realistic with pricing," she said. "The house needs to shine; it needs to be clean and show well. You might want to have somebody walk through with a designer's eye and edit for things like artwork and belongings. If you are selling a house, it's going to have to get packed up at some point anyway, so you might as well do it before it goes on the market, so it shows in its best light."

After 10 years in the residential real estate industry, Sullivan remains confident about the market. She passes that confidence on to potential buyers:

"Buyers, don't give up. Your house is just around the corner. You never know what is going on in someone's life that makes them decide to sell."