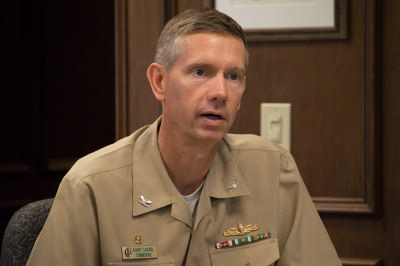 Even with minimally manned ships and unmanned aerial systems coming online quickly for the military, the key to success -- and the armed forces’ main challenge -- is still getting the right people to the right place at the right time. This is further complicated in an era of declining budgets and fiscal uncertainty, with training hours being cut at the same time systems are becoming more complex.

“But they’re also the No. 1 asset,” Pace added. “There’s no substitution for a sailor that’s well-trained, knows exactly what to do about their job and goes about doing it.”

Contrary to popular belief, unmanned aerial systems and minimally manned ships, such as the new littoral combat ship class and the DDG 1000 Zumwalt fleet, actually require more personnel, often on the back end, to monitor and analyze the massive amounts of data the vessels and the systems onboard provide.

The solution may lie in an increasing collaboration between military personnel and industry partners.

“All these systems are providing so much intelligence, but it doesn’t have to be processed on the ship,” said retired Vice Adm. Tim LaFleur, a principal at Booz Allen Hamilton and one of the initial champions of the LCS model.

“And I submit that the right model might be completely different,” he said. “In the past, we always relied on our sailors to do all of that. The right model might be to have a civilian center, contractor-based, that comes in and processes the information and creates some continuity, rather than a sailor being there for 18 months of a shore duty assignment and going back.”

LaFleur added that this civilian-serviceman solution is also financially beneficial, since the cost for a contractor may be higher upfront but won’t have the hidden cost of the Department of Defense’s retirement program, and it comes with a greater ability to terminate contracts if work is not up to snuff.

Capt. Randy Garner, commodore of the LCS Squadron One, said the LCS fleet is already using this approach.

“We’re doing a little bit of what you described. That conditioned-based maintenance center, that analysis is done by a group of people in Maryland that get the data, analyze the data, come back with some assessments, and quite often -- sometimes begrudgingly to the old-school chief engineer who says, ‘I know this ship better than anybody’ -- they say, ‘Go look at this valve, we think it might be clogged.’ And he goes down and looks and the valve was clogged,” Garner said.

This allows the very small crew — typically a base of 40 people that can surge to 80 depending on the mission module onboard and whether an aviation crew is required -- to focus its efforts where they’re most needed.

“As a retired guy, one of the things I’m wondering about -- particularly with LCS -- I don’t have a problem with reduced manning, I think it’s great when the equipment’s new and all the systems work and you’re doing peace-time ops, but how do we figure out what is the right number of bodies you need when the equipment is older and it needs more repair and you’ve taken some casualties and you’re in [General Quarter] and the ship’s on fire?” asked retired Capt. Robert "Brick" Nelson, general manager at Northrop Grumman, voicing the concerns of some in the defense industry who worry that the transition to LCS, which is noticeably lacking in firepower and has faced questions of survivability, is the wrong direction for the Navy.

Garner said a lot of technology onboard the fleet isn’t IT-related, and is meant to augment the work of the crew. He cited its firefighting system, which uses 10 to 20 percent of the water in a normal sprinkler system spread throughout the whole ship, which eliminates the need for extra manpower when fighting fires and cuts down on damage, as well.

He also said it’s important to keep in mind what the fleet is meant for.

“We’re not talking about a ship that has a great redundancy in combat systems, so fighting the ship is more in self-defense,” Garner said. “You’re not defending other forces in the same way that maybe a DDG or a cruiser might. … I think we have a reasonable balance of enough people for the unknowns, and enough advanced systems to help us with the things we predictably need to be able to face, like self-defense or putting out fire. With the crew size, you don’t really know until you experience that, no matter how well you have it figured out, but I think we have a decent plan for the size of the crew.”

The more versatile vessels also have a financial incentive, with a price tag of roughly $400 million, and require only two ships to be built to get one deployed, compared with the typical four or five ships needed to get one deployed.

“People confuse … the offensive capability of LCS with the need for LCS, and it kind of goes back to the requirements, in that during Desert Storm and beyond, we had $5 billion cruisers doing maritime interdiction ops where it was a total waste of the resources,” LaFleur said.

“So you take an LCS with a smaller crew and are able to put a module on there that can do maritime interdiction kinds of things -- it’s far more efficient than what you’re doing,” he said. “And you can use that Aegis cruiser for the kinds of things that you want to use it for. And our nation as an economy can’t afford to build 250 Aegis cruisers -- we need that mix of ships that will do that.”

LCS ships inherently need more senior personnel who are able to carry out multiple military occupational specialties at once, which again comes back to the issue of training.

“That’s our biggest challenge, I think,” said Capt. Frank Olmo, chief of staff for the commander of Surface Force Pacific Fleet. “I think looking at where we’re heading here, we’re looking at technology and getting after tools.

"Tracking our young sailors with all these advanced systems, we’re creating new qualifications, new NECs -- enlisting class classifications -- for how do we track them and assign them to ships and how do we get them into basic phase training.

"I think overall, getting people into the schools is definitely SURFPAC’s No. 1 priority: How do we bring these young sailors out of boot camp into the right schoolings, get them into their first sea tour, back to shore, get them trained up again, hopefully work more qualifications and then back to sea?”

Olmo said reducing variance in the existing fleet is key to starting to standardize training as LCS has done, and also said the new Naval Surface Warfare Development Command, coming to San Diego in August, will be immensely beneficial.

“It’s modeled very closely to the NSAWC [Naval Strike and Air Warfare Center] model, so we have other warfare centers of excellence out there, we have ASW [anti-submarine warfare], so we’re working with the fleet commanders,” Olmo said.

“This will help us really what I call connecting the dots between new TTPs [tactics, techniques and procedures] we have … and then we need to talk the C4I [command, control, communications, computers and intelligence] architectures and try to work the TTPs, in addition to working with industry, with our gap analysis.”

This new command will draw weapons tactics instructors -- WTIs or Jedi Knights as they’re sometimes called -- from Naval Air and Missile Defense Command in Dahlgren, Va., and the Naval Mine and Anti-Submarine Warfare Command in San Diego, and place one of the tactics experts aboard each vessel -- with different models for different fleets -- to aid in training.

In addition to getting the right people to the right place at the right time, a similar challenge exists in the technology space because the Department of Defense’s acquisitions tunnel is notoriously slow, yet the speed of innovation so fast on both the offensive and defensive security sides.

As Garner put it, “It’s probably safe to say our opponents don’t have an acquisition five-year milestone requirement.”

Retired Capt. Dave Grundies, president of G.E.T. Engineering, said the acquisitions process has gotten increasingly difficult, not only due to budget concerns, but because of the variety of legacy and new equipment all needing funding, and the structure through which contracts are awarded.

“There are smart people writing difficult requirements, smart people answer those difficult requirements, and then they have the contract shop grade the requirements and the answers -- so it’s not necessarily technically adept people, they’re contract-adept people, which sometimes skews the answer to the question that a smart guy asked and a smart guy answered. It becomes a word game within a shop by people who don’t really know the technology,” Grundies said.

Nelson added that eight years of continuing resolutions and trying to plan without an actual budget is at the root of most contractors’ woes. Pace suggested that moving some aspects of the acquisition process into the commercial realm might speed the uptake of innovative products and allow systems and security to stay current.

“You have FAR15 [Federal Acquisition Regulation] regulations and FAR12 commercial-based regulations,” Pace said. “Another thing we don’t do well is look at the markets and say, ‘These acquisitions should be FAR12-based, should be more commercially based, because the commercial industry is the leader in this industry.’ How do you take advantage of that? Can you imagine us still building PCs?

“At one point, the Department of Defense built its own PCs and phones, and we made a decision not to do that. I’m saying what about satellites and some other networking equipment and the like? I do not argue that model applies to a naval nuclear power submarine or a ship or a tank or you pick it, but it definitely applies in a lot of areas that we do not exploit.”

Training, technology pick-up and the direction the Navy and military are going are certainly top concerns, but for retired Capt. Peter Hedley, senior business consultant with Galaxie Defense Marketing, the issue runs deeper.

“The larger issues that are not necessarily contract-related or equipment-related but, really, how do you define what is going to be our need national security-wise?

“I’m talking about the Navy and Marine Corps in particular, and I think that’s going to be the tough nut to crack, because as the country goes into what I call amnesia — that is, we’re the only species on Earth that doesn’t learn from its predecessors, I think — and so we’re doomed to repeat the same down cycle that Howard was talking about after Vietnam — that was a beg-a-thon in the Navy.

“We were stealing from other ships and making deals for the nondeployers, and everybody says, ‘No, we’re not going to let that happen again,’ but human nature is a very driving force when it comes to the crew of your ship -- they will do what it takes.

"Directly or indirectly, they’re going get what they need to go on a deployment, which is now extending to nine months, in this, by the way, the cycle when the war’s ending, Navy deployments are not going down; they’re going up.

“And this is driven by requirements that are not matching up to resources to provide the [Navy’s sovereign presence worldwide]. It’s a huge problem that needs a larger national discussion, starting in San Diego.”

April 20, 2011 -- Executive Editor George Chamberlin talks with John Pettitt, president of SDMAC, about the organization's report on the economic impact of the military to San Diego.