Seventy-five proud apprentices and craft trainees celebrated with family and friends the culmination of many years of hard work as they graduated with their apprenticeship and journeyman certificates in June from the Associated Builders and Contractors Apprenticeship Training program.

The members of the class of 2014 from the San Diego region have completed an apprenticeship and craft-training program in skilled crafts such as plumbing, pipe fitting, electrical, electronic systems technology and sheet metal. Their course of study included up to four years of classroom training and thousands of hours of practical field experience.

Clayton Courter, sheet metal apprentice with Southcoast Heating and Air Conditioning, was named Apprentice of the Year. Courter had a straight-A average and perfect class attendance throughout his four-year program. During his last year of training, he also volunteered to help sheet metal instructors during hands-on training labs and continues to volunteer with ABC initiatives. Courter is the 2013 National Craft Champion gold medalist in sheet metal.

Mark Fredin, plumbing instructor, was named the 2014 Instructor of the Year.

All graduates earned college credits through the San Diego Community College District, which can be applied toward an Associate of Science degree. Six apprentices graduating also earned associate degrees by completing additional general education courses plus electives at the same time as their apprenticeship certificates. 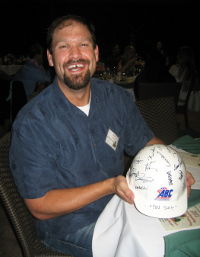 KOGO Radio host Chris Merrill displays his ABC hard hat signed by graduates as a thank you for providing the keynote speech at graduation ceremonies. Photo by Gayle Falkenthal

“Our apprentices expect to spend a lot of time on the job and in labs mastering the required craft skills,” said ABC Apprenticeship Training Trust Chairman William Smyth.

“What they come to understand is how much they also need to have excellent reading and math skills, computer technology skills, management and planning skills, and be fully trained in safety procedures to be successful,” Smyth said. “ABC strives to keep their training up to date with current technology while remaining rooted in knowledge they will always use.”

“These young men and women work very hard to get through this program. They spend a full day working on the job and then spend additional nights in the classroom, week in and week out, for four long years,” said ABC Apprenticeship Training Trust Executive Director Sherry Yarbrough. “It takes commitment and determination to graduate from our program. Family support plays a big role in their success.”

ABC San Diego’s program has been awarded Accredited Training Sponsor Status from the National Center for Construction Education and Research, assuring all its members of nationally recognized training for their craft professionals. NCCER is a nonprofit education foundation created to develop standardized construction, maintenance, and pipeline curricula with portable credentials and help address the critical skilled workforce shortage. NCCER is affiliated with the University of Florida's M.E. Rinker, Sr. School of Building Construction.