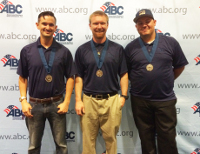 Three craft competitors representing the Associated Builders and Contractors of San Diego won a trio of silver medals at the ABC National Craft Championships held at the ABC National Workforce Development Conference in Birmingham, Ala. This prestigious competition brings together the country’s top apprentices and trainees who vie to be named No. 1 in each of 13 trades.

The three silver medals bring the total to 16 medals won by San Diego competitors in 13 years of national competition. 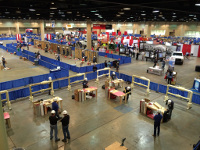 For the first time this year, special safety awards were given to the competitor in each craft discipline who demonstrated the highest level of best practices in safety and operations while competing. ABC San Diego apprentice Franklin Noble won in the electrical category.

Ederer, Noble and Sullivan faced off among national finalists from local, regional and state competitions around the country. Prior to the competition, each spent several weeks studying and practicing his skills at the ABC Apprenticeship Training Trust lab facilities in Poway. They received guidance and tips from ABCSD’s instructors and previous competitors.

Sheet metal competitor Kevin Sullivan described the experience as “hectic, nerve-racking, a good time, borderline life-changing.” Sullivan was so focused during the competition, “I didn’t even notice the spectators," he said. "I was head down, sheet metal was flying. I looked up and saw my son once, said ‘hi,’ and that was about it.”

Sullivan invested a lot of personal time in additional training prior to the competition and credited his journeymen mentors at Brian Cox Mechanical with helping prepare him with the necessary skills. Sullivan said it also helped to have other members of the San Diego team there to help calm one another down.

“We set the bar higher and higher every single year,” Smyth said. “Our winners compete not just for themselves, but also on behalf of their peers and on behalf of our apprenticeship training program. It’s a lot of pressure.

“For post-secondary students participating in apprenticeship career training programs, there are very few opportunities to compete when compared to students in academic programs. This is why our National Craft Championships are so important to people in the construction industry.

“It was exciting to be in Birmingham to watch and sweat out the results with Richard, Kevin and Franklin. They deserve so much credit for putting in the hard work it takes to reach this level of excellence,” Smyth said.

A conference highlight, the ABC National Craft Championships event started in 1987 as a way to recognize the high quality of craft training in construction careers. The competition emphasizes the important role craft skills training plays in construction, by evaluating contestants’ knowledge of their craft as well as their skill and talent. Seasoned apprentices and craft trainees from around the country compete head to head to determine the top three craftpersons in each trade.

The first part of the competition features a written test of the competitors’ technical and theoretical knowledge. On day two, apprentices and craft trainees are assigned their workspaces and given the plans, tools and materials they need to build professional projects. Judges observe and inspect the work being performed. When time is called, the judges move in for the final inspection. All of this takes place before a live audience. The results are announced in awards ceremonies the following day.

To compete in the national event, contestants must first successfully complete hundreds of hours of classroom training and thousands of hours of practical field experience to be eligible for preliminary local competitions.